Sailing Alone Around the World (Paperback) 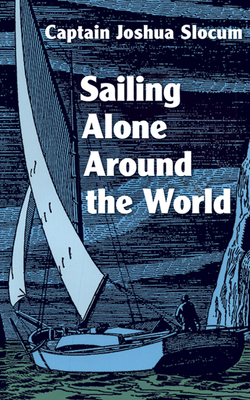 The classic of its kind. --Travel World
One of the most readable books in the whole library of adventure. --Sports Illustrated
The finest single-handed adventure story yet written. --Seafarer
Challenged by an expert who said it couldn't be done, Joshua Slocum, an indomitable New England sea captain, set out in April of 1895 to prove that a man could sail alone around the world. 46,000 miles and a little over 3 years later, the proof was complete: Captain Slocum had performed the epic first single-handedly in a trusty 34-foot sloop called the Spray. This is Slocum's own account of his remarkable adventures during the historic voyage.
Slocum writes in a fast-paced, exhilarating style. His almost matter-of-fact descriptions of hazardous episodes and his colorful, often witty observations make this book perhaps the most delightful and absorbing adventure tale in history. Across the Atlantic he sailed, but chased by Moorish pirates off Gibraltar, he decided to circle Cape Horn instead and go around the world the other way He tells of perils on stormy seas and of numerous harrowing events: his escape from a fleet of hostile canoes; an encounter with Black Pedro, the worst murderer in Tierra del Fuego; foiling a nocturnal attack by savages by strewing carpet tacks on the Spray's deck; submerged by a great wave off the Patagonian coast; the rain of blood in Australia; dodging coral reefs in the South Seas. In Samoa, he was visited by Mrs. Robert Louis Stevenson; in South Africa, he talked congenially with Stanley of Stanley and Livingstone fame, and met Oom Paul Kruger, President of the Transvaal republic. Kruger was incensed when one of his officials described Slocum's voyage as around the world, since his religious beliefs convinced him that the world was flat
This robust classic of the sea has been widely read ever since its first publication in 1900. It has been reprinted several times and has even been required reading in many schools. This edition (complete with all of the original Thomas Fogarty illustrations) of Captain Slocum's story will prove as enjoyable and thrilling to the present generation of Americans as it was to our fathers and grandfathers.

This feature require that you enable JavaScript in your browser.
END_OF_DOCUMENT_TOKEN_TO_BE_REPLACED

This feature require that you enable JavaScript in your browser.
END_OF_DOCUMENT_TOKEN_TO_BE_REPLACED

This feature require that you enable JavaScript in your browser.
END_OF_DOCUMENT_TOKEN_TO_BE_REPLACED