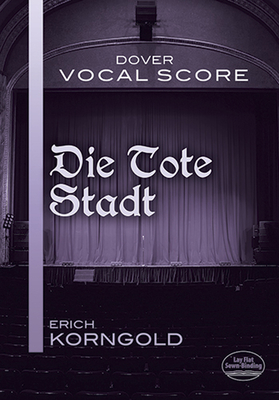 This 1920 vocal score is from a three-act opera by a 23-year-old composer who has seen a recent resurgence in popularity. The libretto is credited to Paul Schott, a pseudonym for the composer and his father, Julius Korngold. Based on the short novel Bruges-la-Morte by Georges Rodenbach, the plot relates a young widower's obsession with his late wife.
Within two years of its premiere, this work had been performed around the world, including several performances at New York's Metropolitan Opera House. Banned during the Nazi regime on account of the composer's Jewish ancestry, Die Tote Stadt fell into obscurity, only to resurface in the late 1980s. Since then it has been performed at famous opera halls in Paris, England, Austria, Australia, and the United States. Voice students, amateur and professional choral groups, and opera troupes and companies will appreciate this inexpensive and authoritative score, which features an appendix with an English translation of the original German libretto.

This feature require that you enable JavaScript in your browser.
END_OF_DOCUMENT_TOKEN_TO_BE_REPLACED

This feature require that you enable JavaScript in your browser.
END_OF_DOCUMENT_TOKEN_TO_BE_REPLACED

This feature require that you enable JavaScript in your browser.
END_OF_DOCUMENT_TOKEN_TO_BE_REPLACED