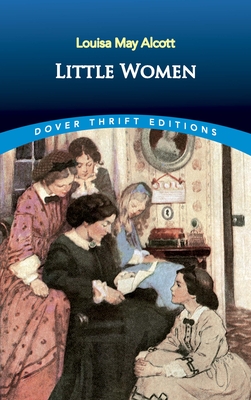 This American classic is as fresh and meaningful today as it was when it was first written in the mid-nineteenth century. Largely based on the author's own childhood, Little Women is a timeless tale of the four young March sisters: Meg, Jo, Beth, and Amy. As different in their personalities as they are alike in their devotion to each other, the girls vow to support their beloved mother, Marmee, by behaving their best while Father is away, serving as an army chaplain in the Civil War.
Literary-minded tomboy Jo develops a fast friendship with the boy next door, and pretty Meg, the eldest, finds romance; frail and affectionate Beth fills the house with music, and Amy, the youngest, seeks beauty with all the longing of an artist's soul. Although poor in material wealth, the family possesses an abundance of love, friendship, and imaginative gifts that captivate readers time and again.

Best known as the author of Little Women, Louisa May Alcott (1832-88) grew up in a community of New England transcendentalists that included Thoreau and Emerson. Because her learned but impractical father was a poor provider, she supported her family by writing stories for magazines while she was still a teenager. Alcott worked in Washington, D.C., during the Civil War as a nurse, recording her experiences in Hospital Sketches, and her many novels are particularly noteworthy for their portraits of strong, self-reliant heroines.

This feature require that you enable JavaScript in your browser.
END_OF_DOCUMENT_TOKEN_TO_BE_REPLACED

This feature require that you enable JavaScript in your browser.
END_OF_DOCUMENT_TOKEN_TO_BE_REPLACED

This feature require that you enable JavaScript in your browser.
END_OF_DOCUMENT_TOKEN_TO_BE_REPLACED