Henry Thoreau: A Life of the Mind (Paperback) 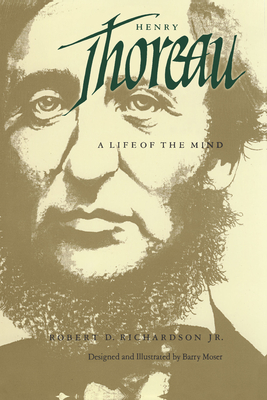 The two years Thoreau spent at Walden Pond and the night he spent in the Concord jail are among the most familiar features of the American intellectual landscape. In this new biography, based on a reexamination of Thoreau's manuscripts and on a retracing of his trips, Robert Richardson offers a view of Thoreau's life and achievement in their full nineteenth century context.

Robert D. Richardson, Jr. is the author of Emerson: The Mind on Fire (California, 1995) among other books.

"A splendidly written book. . . . Richardson's critical discussions of the journals, Walden, Cape Cod, and the other works are invariably illuminating and cast a new light on Thoreau's sometimes cross-grained but fascinating personality. . . . The arc of Thoreau's progress is more absorbing than any thriller .... This is a splendidly written book, handsomely designed and illustrated by Barry Moser and worthy of a place on the bookshelf near Walden."
— Boston Globe

"A prose style graceful and lucid enough to survive side by side comparison with Thoreau's own epigrammatic brilliance."
— Booklist

"One of the most significant contributions of Henry Thoreau: A Life of the Mind is its rich, erudite exploration of how Thoreau's reading -considered in, and interwoven with, the vividly portrayed contexts of his times, life, and writing-influenced and informed his intellectual and creative development."
— New England Quarterly

"The Thoreau represented here both feels and thinks, complains and exalts, loves and loses—in short, we have an engrossing picture of both the inner and the outer man. . . . Written for the general reader as well as the student and scholar, this book will have no trouble assuming its place among the most noteworthy, useful, and read- able studies yet provided on Thoreau."
— Journal of American History

"Richardson's exhaustively researched biography of Thoreau presents a comprehensive, thorough, deeply human, and philosophically insightful investigation of this increasingly significant author in light of the social, political, economic, scientific, intellectual, and spiritual climate of America and Europe of that day."
— Journal of Forest History

"Richardson's book is the best introduction and guide to Thoreau's thought that we are likely to obtain. It leads us to re-read Thoreau [and] to recognize that we are hearing a unique, and perhaps essential, American voice."
— Wilson Quarterly

"While this is not an environmental history, Richardson places his subject appropriately within the context of the landscape of Concord as it was in the 1840s and 1850s. Even more perceptively, he reveals Thoreau's environmental ideas as evolving within the ecosystem of his other intellectual interests."
— Environmental Review

"Richardson, like Thoreau, writes on the level of most significant detail; his account of Thoreau's development from his return to Concord from Harvard in 1837 to his death in 1862 is neither diffusively tedious nor glibly generalizing. He is particularly original in delineating the major foreign influences on Thoreau, especially the German (Goethe), the classical (Cato), and the British (Gilpin, Darwin, and Ruskin). The style is graceful and clear, and the author's admiration for his subject does not lapse into adulation or preachiness. Both a fine introduction and a major scholarly contribution."
— Library Journal

"One of the great achievements in contemporary American literary studies. . . . Aside from his learning, which is prodigious, Richardson writes a wonderfully fluent, agile prose; he has a poet's sense of nuance and a novelist's grasp of dramatic rhythm; he also displays a positive genius for apt quotation."
— John Banville,

This feature require that you enable JavaScript in your browser.
END_OF_DOCUMENT_TOKEN_TO_BE_REPLACED

This feature require that you enable JavaScript in your browser.
END_OF_DOCUMENT_TOKEN_TO_BE_REPLACED

This feature require that you enable JavaScript in your browser.
END_OF_DOCUMENT_TOKEN_TO_BE_REPLACED