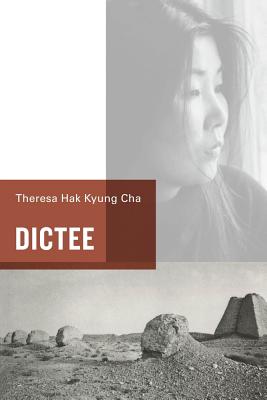 Dictée is the best-known work of the versatile and important Korean American artist Theresa Hak Kyung Cha. A classic work of autobiography that transcends the self, Dictée is the story of several women: the Korean revolutionary Yu Guan Soon, Joan of Arc, Demeter and Persephone, Cha’s mother Hyung Soon Huo (a Korean born in Manchuria to first-generation Korean exiles), and Cha herself. The elements that unite these women are suffering and the transcendence of suffering. The book is divided into nine parts structured around the Greek Muses. Cha deploys a variety of texts, documents, images, and forms of address and inquiry to explore issues of dislocation and the fragmentation of memory. The result is a work of power, complexity, and enduring beauty.

Theresa Hak Kyung Cha (1951-1982) was a poet, filmmaker, and artist. In 1982, Cha was murdered by a stranger in New York City, just a few days after the original publication of Dictée.

"Reads like a secret dossier, stuffed with epistles and pictures, religion, and dreams."
— Village Voice

"Too often, of course, the colonizing function of language goes about its invisible work without comment, but in Dictée each scene, each image, each poem or letter purposefully refers us back to it."
— Paris Review

"A fringe classic for students of women’s studies, book arts, and poetry."
— Artforum

“A resolutely avant-garde book. . . . Dictée has spent decades as a cult classic, becoming a fixture of Asian American and feminist studies syllabi across the country.”
— The Nation

"All writers who play with form that have come since are indebted to Theresa Hak Kyung Cha, often without even knowing it."
— Kenyon Review

"It remains as radical a text as it was when I first found it, daring to hold a space open somewhere in between several genres, and to let tensions remain unresolved, or ambiguous, to pursue if not the articulation of the inarticulate, then, to let the reader experience what is inarticulate within themselves still in a space that makes room for it or even values it."
— Alexander Chee,

"Dictée was one of the first books that taught me the transformative power that art could have on the material of a life—that conceptual art wasn’t only populated by urban white folks, and lives like Cha’s or mine or my mother’s could make a strange and wild home there, too."
— Elaine Castillo,

"Dictée addresses themes of time, language, and memory that recur in much of the artist’s work while incorporating multiple forms of media, language, and historical material. . . . Nine chapters, structured around the muses of Greek mythology, result in a form that is novel, prose poem, biography, and photo book all at once."
— Hyperallergic

"Cha’s work is both academic and emotionally present, theoretical and practical. It eschews easy classification, and is influenced by filmmakers as much as it is by playwrights, visual artists, poets, and critics."
— Ploughshares

"The brilliance of Dictée is in its subverting the dynamics of understandability: incomprehensibility as the communicative channel, obscurity as the language to discuss illumination."
— Columbia Journal

This feature require that you enable JavaScript in your browser.
END_OF_DOCUMENT_TOKEN_TO_BE_REPLACED

This feature require that you enable JavaScript in your browser.
END_OF_DOCUMENT_TOKEN_TO_BE_REPLACED

This feature require that you enable JavaScript in your browser.
END_OF_DOCUMENT_TOKEN_TO_BE_REPLACED