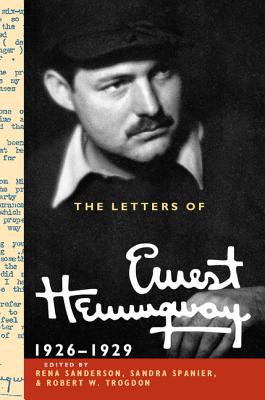 The Letters of Ernest Hemingway, Volume 3: 1926-1929, featuring many previously unpublished letters, follows a rising star as he emerges from the literary Left Bank of Paris and moves into the American mainstream. Maxwell Perkins, legendary editor at Scribner's, nurtured the young Hemingway's talent, accepting his satirical novel Torrents of Spring (1926) in order to publish what would become a signature work of the twentieth century: The Sun Also Rises (1926). By early 1929 Hemingway had completed A Farewell to Arms. Hemingway's letters of this period also reflect landmark events in his personal life, including the dissolution of his first marriage, his remarriage, the birth of his second son, and the suicide of his father. As the volume ends in April 1929, Hemingway is setting off from Key West to return to Paris and standing on the cusp of celebrity as one of the major writers of his time.

This feature require that you enable JavaScript in your browser.
END_OF_DOCUMENT_TOKEN_TO_BE_REPLACED

This feature require that you enable JavaScript in your browser.
END_OF_DOCUMENT_TOKEN_TO_BE_REPLACED

This feature require that you enable JavaScript in your browser.
END_OF_DOCUMENT_TOKEN_TO_BE_REPLACED