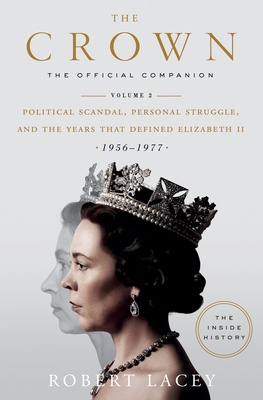 Can’t get enough of The Crown? In this must-have exploration of the history behind seasons 2 and 3 of Peter Morgan’s Emmy-winning Netflix drama, the show’s historical consultant answers all your questions alongside beautifully reproduced archival photographs.

In this eye-opening companion to seasons 2 and 3 of Netflix’s acclaimed series The Crown, renowned biographer and historical consultant Robert Lacey takes us through the real history that inspired the drama.

Covering two tumultuous decades in the reign of Queen Elizabeth II, Lacey looks at the key social, political, and personal moments and their effects—not only on the royal family but also on the world around them. From the Suez Crisis and the U.S.–Soviet space race to the legacy of the Duke of Windsor’s collaboration with Hitler, along with the rumored issues with the royal marriage, the book provides a thought-provoking insight into the historic decades that the show explores, revealing the truth behind the on-screen drama.

Fascinating and fast-paced, this is a unique look behind the history that inspired the show and the years that would prove to be the making of the Queen.

The Crown is now available to watch on Netflix.

The Crown is produced by Left Bank Pictures in association with Sony Pictures Television for Netflix.

Robert Lacey is the historical consultant to The Crown, having previously worked with the show’s creator, Peter Morgan, on his Oscar-winning movie The Queen. As a renowned British historian and the author of numerous international bestsellers, including Majesty, his pioneering biography of Queen Elizabeth II, Lacey has been writing about the queen and her extraordinary life for more than forty years. He is the ideal companion to explain and reveal the secrets of her long reign.

This feature require that you enable JavaScript in your browser.
END_OF_DOCUMENT_TOKEN_TO_BE_REPLACED

This feature require that you enable JavaScript in your browser.
END_OF_DOCUMENT_TOKEN_TO_BE_REPLACED

This feature require that you enable JavaScript in your browser.
END_OF_DOCUMENT_TOKEN_TO_BE_REPLACED