Curious George At The Aquarium With Downloadable Audio (Paperback) 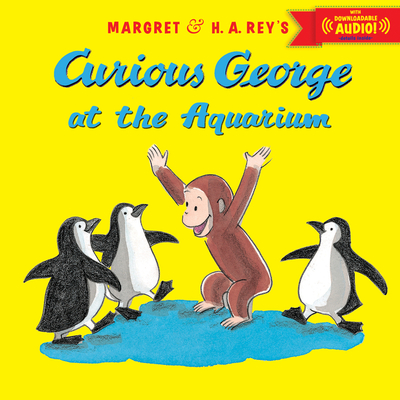 Splash! The aquarium is a big place for a little monkey, and there is so much to see. George’s curiosity soon helps him to make lots of penguin friends . . . and lots of trouble!
The paperback edition includes educational fun facts about aquariums and sea life, provided by the director of the Mystic Aquarium in Mystic, Connecticut. Bonus activities in the paperback edition include a maze and a word jumble. For more fun with George, check out www.curiousgeorge.com and get all the latest news and information about Curious George, books, promotions, games, activities, and more!

Hans and Margret Rey created many books during their lives together, including Curious George, one of the most treasured classics of all time, as well as other favorites like Spotty and Pretzel. But it was their rambunctious little monkey who became an instantly recognizable icon. After the Reys escaped Paris by bicycle in 1940 carrying the manuscript for the original Curious George, the book was published in America in 1941. More than 200 Curious George titles followed, with 75 million books sold worldwide. Curious George has been successfully adapted into a major motion picture and an Emmy-winning television show on PBS. www.curiousgeorge.com.

This feature require that you enable JavaScript in your browser.
END_OF_DOCUMENT_TOKEN_TO_BE_REPLACED

This feature require that you enable JavaScript in your browser.
END_OF_DOCUMENT_TOKEN_TO_BE_REPLACED

This feature require that you enable JavaScript in your browser.
END_OF_DOCUMENT_TOKEN_TO_BE_REPLACED