Walden and Other Writings (Mass Market) 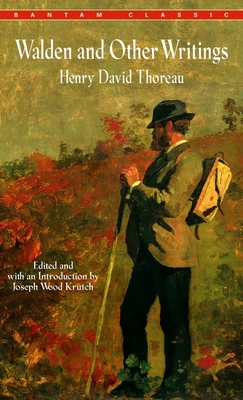 With their call for "simplicity, simplicity, simplicity!”, for self-honesty, and for harmony with nature, the writings of Henry David Thoreau are perhaps the most influential philosophical works in all American literature. The selections in this volume represent Thoreau at his best. Included in their entirety are Walden, his indisputable masterpiece, and his two great arguments for nonconformity, Civil Disobedience and Life Without Principle. A lifetime of brilliant observation of nature--and of himself--is recorded in selections from A Week On The Concord And Merrimack Rivers, Cape Cod, The Maine Woods and The Journal.

Henry David Thoreau was born July 12, 1817 - "just in the nick of time," as he wrote, for the "flowering of New England," when the area boasted such eminent citizens as Emerson, Hawthorne, Whitman and Melville. Raised in genteel poverty - his father made and sold pencils from their home - Thoreau enjoyed, nevertheless, a fine education, graduating from Harvard in 1837. In that year, the young thinker met Emerson and formed the close friendship that became the most significant of his life. Guided, sponsored and aided by his famous older colleague, Thoreau began to publish essays in The Dial, exhibiting the radical originality that would gain the disdain of his contemporaries but the great admiration of all succeeding generations.

In 1845, Thoreau began the living experiment for which he is most famous. During his two years and two months in the shack beside the New England pond, he wrote his first important work, A Week on the Concord and Merrimack Rivers (1849), was arrested for refusing to pay his poll tax to a government that supported slavery (recorded in "Civil Disobedience") and gathered the material for his masterpiece, Walden (1854). He spent the rest of his life writing and lecturing and died, relatively unappreciated, in 1862.