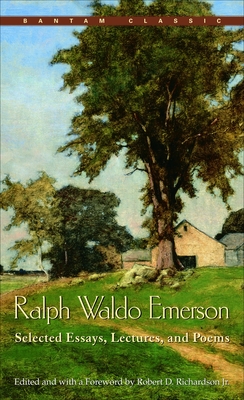 By Ralph Waldo Emerson
$7.99
On Our Shelves Now

A new, wide-ranging selection of Ralph Waldo Emerson’s most influential writings, this edition captures the essence of American Transcendentalism and illustrates the breadth of one of America’s greatest philosophers and poets.

The writings featured here show Emerson as a protester against social conformity, a lover of nature, an activist for the rights of women and slaves, and a poet of great sensitivity. As explored in this volume, Emersonian thought is a unique blend of belief in individual freedom and in humility before the power of nature. “I become a transparent eyeball,” Emerson wrote in Nature, “I am nothing; I see all; the currents of the Universal Being circulate through me; I am part or particle of God.” Written over a century ago, this passage is a striking example of the passion and originality of Emerson’s ideas, which continue to serve as a spiritual center and an ideological base for modern thought.

Ralph Waldo Emerson (1803 —1882) was a renowned lecturer and writer, whose ideas on philosophy, religion, and literature influenced many writers, including Henry David Thoreau and Walt Whitman. After an undergraduate career at Harvard, he studied at Harvard Divinity School and became an ordained minister, continuing a long line of ministers in his family. He traveled widely and lectured, and became well known for his publications Essays and Nature.

This feature require that you enable JavaScript in your browser.
END_OF_DOCUMENT_TOKEN_TO_BE_REPLACED

This feature require that you enable JavaScript in your browser.
END_OF_DOCUMENT_TOKEN_TO_BE_REPLACED

This feature require that you enable JavaScript in your browser.
END_OF_DOCUMENT_TOKEN_TO_BE_REPLACED