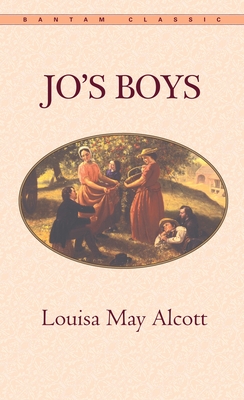 By Louisa May Alcott
$4.95
Special Order - may be out of print

Best known for the novels Little Women and Little Men, Louisa May Alcott brought the story of her feisty protagonist Jo and the adventures and misadventures of the March family to an entertaining, surprising, and bittersweet conclusion in Jo’s Boys. Beginning ten years after Little Men, Jo’s Boys revisits Plumfield, the New England school still presided over by Jo and her husband, Professor Bhaer. Jo remains at the center of the tale, surrounded by her boys—including rebellious Dan, sailor Emil, and promising musician Nat—as they experience shipwreck and storm, disappointment and even murder.

Popular for over a century, Alcott’s series still holds universal appeal with its powerful and affectionate depiction of family—the haven where the prodigal can always return, adversity is shared, and our dreams of being cherished, despite our flaws, come true. In this edition of Jo’s Boys, readers once again experience a treasured classic by one of America’s best-loved writers.

This feature require that you enable JavaScript in your browser.
END_OF_DOCUMENT_TOKEN_TO_BE_REPLACED

This feature require that you enable JavaScript in your browser.
END_OF_DOCUMENT_TOKEN_TO_BE_REPLACED

This feature require that you enable JavaScript in your browser.
END_OF_DOCUMENT_TOKEN_TO_BE_REPLACED