And Then There Were None (Paperback) 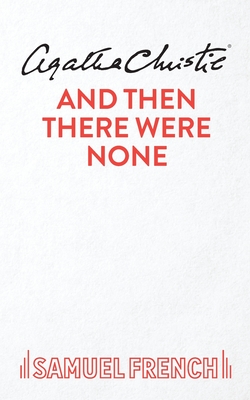 By Agatha Christie
Email or call for price.

Ten strangers are summoned to a remote island. All that the guests have in common is a wicked past they're unwilling to reveal and a secret that will seal their fate. For each has been marked for murder. As the weather turns and the group is cut off from the mainland, the bloodbath begins and one by one they are brutally murdered in accordance with the lines of a sinister nursery rhyme.

In writing the stage version of her most successful and darkest novels during the Second World War, Agatha Christie responded to the mood of the times by introducing a more positive ending. The play was a smash hit in the West End and on Broadway. The alternate version of the play's ending, drawn from the novel and using entirely Agatha Christie's own words, is now available in this updated edition

This feature require that you enable JavaScript in your browser.
END_OF_DOCUMENT_TOKEN_TO_BE_REPLACED

This feature require that you enable JavaScript in your browser.
END_OF_DOCUMENT_TOKEN_TO_BE_REPLACED

This feature require that you enable JavaScript in your browser.
END_OF_DOCUMENT_TOKEN_TO_BE_REPLACED