Minus the Journey: A Journal through Europe-a Redemption in Serbia (Paperback) 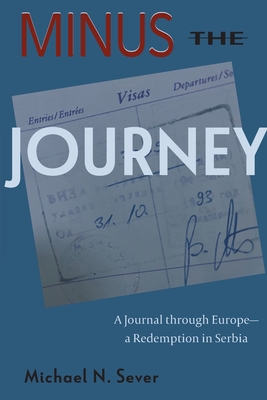 In the fall of 1993, Author Michael N. Sever embarked on a 2-month mission to honor his late father. During that time, he experienced the whole gamut of Europe, from artistic to atrocious. However, most of his experiences were light-hearted as he relates them through self-deprecating humor and sometimes obscure cultural references. Mr. Sever's story demonstrates the self-reliance and resourcefulness that innately define many aging Gen-Xers. This humor and those traits enabled the author to see his goal to the end.

Some examples of his travails in France:

I would buy a beret and a loaf of long bread. I would wear black clothes and smoke clove cigarettes. Existentialism would become my mistress. The Selecty Home Pension would fade from my memory.

It was a horrible walk with a heavy-almost painfully heavy pack-yoked to my bent and near broken back. At a few points I caught myself talking to myself, alternating from encouragement to scolding.

I felt my face contorting into scowls.

I had gone mad in Vienna. I would be placed in the sanitorium that housed Dr. Caligari. I would befriend a somnambulist who lived in a cabinet. My world would consist of odd-angled doors and hallways.

Just as I was about to give up and wait for the men in white suits, I saw civilization. I saw a woman walking and grunted, "Hotels?"

She told me, in broken English, that I could find them in the "ring," and she pointed me the way.

In my near-animal devolution, I offered her no thanks; I just snorted and knuckle-walked down the strasse.

But never forgetting the beauty:

I did that all the way to Piazza San Marcos. From there, I walked and walked and walked. I walked down large tourist filled avenues, down small desolate side paths-I took in the city. I saw laundry hanging out of medieval windows, and I saw flood-scarred buildings. I walked over odd canals and tiny bridges. I saw red and white poles measuring the depth of the water, and gondolas and scows racing about the lagoon.

I finally got it. This was what it meant to be lost in Venice. Not when you had to use the bathroom, but when you wanted to feel the city-to experience every last nook and dead end.

It was beautiful to not be in a rush.

This feature require that you enable JavaScript in your browser.
END_OF_DOCUMENT_TOKEN_TO_BE_REPLACED

This feature require that you enable JavaScript in your browser.
END_OF_DOCUMENT_TOKEN_TO_BE_REPLACED

This feature require that you enable JavaScript in your browser.
END_OF_DOCUMENT_TOKEN_TO_BE_REPLACED