The Spider: Inside the Criminal Web of Jeffrey Epstein and Ghislaine Maxwell (Hardcover) 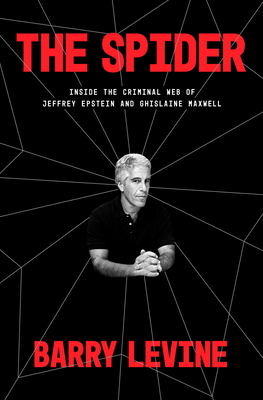 Who was Jeffrey Epstein? A Pulitzer Prize–nominated journalist unearths never-before-reported details in the most comprehensive account yet of the disgraced financier’s life, death, and criminal web, including the role of Ghislaine Maxwell.

By now, the basic contours of Jeffrey Epstein’s horrendous crimes—his decades-long serial abuse of young women and underage girls—are familiar. But for all that has been written about Epstein since his shocking death in a lower Manhattan jail cell, an astonishing amount remains unknown. A shy Brooklyn kid turned renegade financier, Jeffrey Epstein never wanted to play by the rules of polite society. He was elusive in life and he has remained just as elusive in death.

What is known is that he had amassed nearly $600 million by the time of his death. That fortune allowed Epstein to pursue a privileged, secretive life, jetting between his fortress-like homes in Manhattan, New Mexico, and Little St. James, his private island. Behind these closed doors, Epstein socialized with scientists and world leaders and preyed on powerless young women.

In The Spider, Barry Levine shines a light into the darkest corners of Epstein’s world, including

• Epstein’s young adulthood and earliest accusations of sexual misconduct
• the murky sources of Epstein’s fortune and business dealings
• Epstein’s circle of confidantes and employees, particularly the nature of his long relationship with socialite Ghislaine Maxwell
• his ties to powerful men, including Bill Clinton, Prince Andrew, Les Wexner, and Donald Trump
• Epstein’s last hours as a free man in Paris and the secret operation to arrest him at a New Jersey airport before he could flee
• new details on Epstein’s final days in jail and the mystery surrounding his death

Featuring rare and never-before-seen photographs, The Spider exposes how Epstein operated and evaded justice for so long—and how he drew so many others into his criminal web.

Barry Levine is a veteran investigative reporter and editor in print and television. He received the HuffPost’s “Game Changer” award in 2010 and led a reporting team to a Pulitzer Prize nomination for investigative reporting and national news reporting. He is the co-author of All the President’s Women and lives in New York.

“An exhaustively detailed look at the life, death, and alleged crimes of Epstein, along with his years-long friendship with Trump in the 1990s and early 2000s—and how Trump’s ascendancy to the presidency ultimately helped expose Epstein.”—Forbes

This feature require that you enable JavaScript in your browser.
END_OF_DOCUMENT_TOKEN_TO_BE_REPLACED

This feature require that you enable JavaScript in your browser.
END_OF_DOCUMENT_TOKEN_TO_BE_REPLACED

This feature require that you enable JavaScript in your browser.
END_OF_DOCUMENT_TOKEN_TO_BE_REPLACED