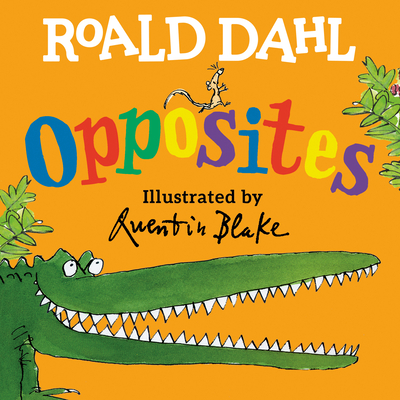 Learn your opposites with Roald Dahl, the World's No. 1 Storyteller!

This deluxe board book is the perfect way to learn about opposites. Featuring beloved art created by Quentin Blake from Roald Dahl's classic books, this book is perfect for libraries, the youngest classrooms, and baby shower gifts to start your child's bookshelf.

Roald Dahl (1916–1990) was born in Llandaff, South Wales, and went to Repton School in England. His parents were Norwegian, so holidays were spent in Norway. As he explains in Boy, he turned down the idea of university in favor of a job that would take him to "a wonderful faraway place." In 1933 he joined the Shell Company, which sent him to Mombasa in East Africa. When World War II began in 1939, he became a fighter pilot and in 1942 was made assistant air attaché in Washington, where he started to write short stories. His first major success as a writer for children was in 1964. Thereafter his children's books brought him increasing popularity, and when he died, children mourned the world over, particularly in Britain where he had lived for many years.

Quentin Blake's first book, Patrick, was published in 1968 and was followed by classics such as Mister Magnolia, All Join In, and Clown. He is best known for illustrating Roald Dahl’s books. A patron of the Association of Illustrators, he was awarded the Kate Greenaway Medal in 1980 and the international Hans Christian Andersen Award in 2002, and was the inaugural British Children’s Laureate from 1999 to 2001.

This feature require that you enable JavaScript in your browser.
END_OF_DOCUMENT_TOKEN_TO_BE_REPLACED

This feature require that you enable JavaScript in your browser.
END_OF_DOCUMENT_TOKEN_TO_BE_REPLACED

This feature require that you enable JavaScript in your browser.
END_OF_DOCUMENT_TOKEN_TO_BE_REPLACED