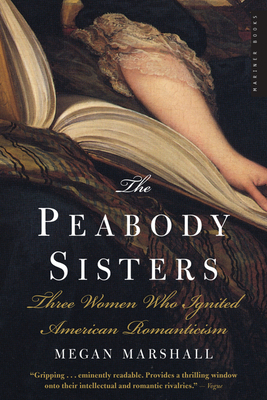 Elizabeth, Mary, and Sophia Peabody were in many ways our American Brontes. The story of these remarkable sisters — and their central role in shaping the thinking of their day — has never before been fully told. Twenty years in the making, Megan Marshall's monumental biograpy brings the era of creative ferment known as American Romanticism to new life. Elizabeth, the oldest sister, was a mind-on-fire thinker. A powerful influence on the great writers of the era — Emerson, Hawthorne, and Thoreau among them — she also published some of their earliest works. It was Elizabeth who prodded these newly minted Transcendentalists away from Emerson's individualism and toward a greater connection to others. Mary was a determined and passionate reformer who finally found her soul mate in the great educator Horace Mann. The frail Sophia was a painter who won the admiration of the preeminent society artists of the day. She married Nathaniel Hawthorne — but not before Hawthorne threw the delicate dynamics among the sisters into disarray. Marshall focuses on the moment when the Peabody sisters made their indelible mark on history. Her unprecedented research into these lives uncovered thousands of letters never read before as well as other previously unmined original sources. The Peabody Sisters casts new light on a legendary American era. Its publication is destined to become an event in American biography.

This book is highly recommended for students and reading groups interested in American history, American literature, and women's studies. It is a wonderful look into 19th-century life.

MEGAN MARSHALL is the winner of the 2014 Pulitzer Prize in Biography for Margaret Fuller, and the author of The Peabody Sisters, which won the Francis Parkman Prize, the Mark Lynton History Prize, and was a finalist for the Pulitzer Prize in 2006. She is the Charles Wesley Emerson College Professor and teaches narrative nonfiction and the art of archival research in the MFA program at Emerson College. For more, visit www.meganmarshallauthor.com.

This feature require that you enable JavaScript in your browser.
END_OF_DOCUMENT_TOKEN_TO_BE_REPLACED

This feature require that you enable JavaScript in your browser.
END_OF_DOCUMENT_TOKEN_TO_BE_REPLACED

This feature require that you enable JavaScript in your browser.
END_OF_DOCUMENT_TOKEN_TO_BE_REPLACED