The Carpet Weaver of Usak (Paperback) 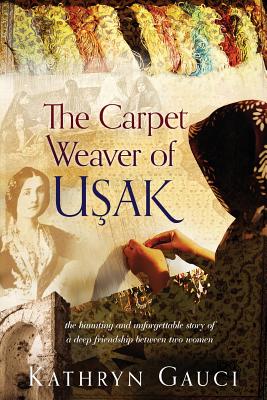 "Springtime and early summer are always beautiful in Anatolia. Hardy winter crocuses, blooming in their thousands, are followed by blue muscari which adorn the meadows like glorious sapphires on a silk carpet."
Set amidst the timeless landscape and remote villages of Anatolia, The Carpet Weaver of Uşak is the haunting and unforgettable story of a deep friendship between two women, one Greek Orthodox, the other a Muslim Turk: a friendship that transcends an atmosphere of mistrust, fear and ultimate collapse, long after the wars have ended.
Life in Stavrodromi and Pınarbaşı always moved at a slow pace. The years slipped by with the seasons and news was gathered from the camel trains passing through. The Greek and Turkish inhabitants of these two villages managed to pull together in adversity, keeping an eye out for each other. In the centre of the village stood the Fountain of the Sun and Moon. Here the locals congregated to celebrate the events in each other's life - their loves and losses, their hopes and dreams. When war broke out in a faraway place that few had heard of, a sense of foreboding crept into the village, as silently as the winter mists that heralded the onset of another long, cold winter.
1914: As the tentacles of The Great War threaten to envelop the Ottoman Empire, Uşak, the centre of the centuries-old carpet weaving industry in Turkey, prepares for war. Carpet orders are cancelled and the villagers whose lives depend on weaving, have no idea of the devastating impact the war will have on their lives.
1919: In the aftermath of the war, the tenuous peace is further destabilized when the Greek army lands in Smyrna and quickly fans out into the hinterland. Three years later, the population of Stavrodromi and Pınarbaşı are forced to take sides. Loyalties and friendships that existed for generations are now irrevocably torn apart. Their world has changed forever.

This feature require that you enable JavaScript in your browser.
END_OF_DOCUMENT_TOKEN_TO_BE_REPLACED

This feature require that you enable JavaScript in your browser.
END_OF_DOCUMENT_TOKEN_TO_BE_REPLACED

This feature require that you enable JavaScript in your browser.
END_OF_DOCUMENT_TOKEN_TO_BE_REPLACED