History of the Battle of Lake Erie, and Miscellaneous Papers (Paperback) 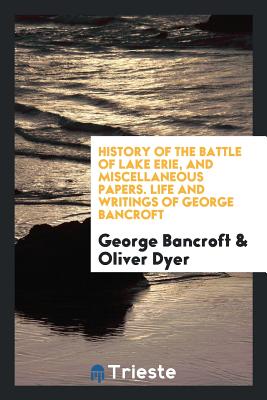 By George Bancroft
$17.99
Special Order - may be out of print

Books about the United States Military History generally begin with the American War of Independence, 1775-1783, against the United Kingdom, however the American Civil War (1861-1865) was responsible for more casualties than all its other wars combined. The US had a role World War 1 (1917-18), and was a decisive factor in World War II (1941-1945). Other wars have included the Indian Wars, the Spanish-American War, Korea, Vietnam, the Gulf War, Iraq and Afghanistan. Examples of titles included in the category are: History of the Battle of Lake Erie, Battles in Culpeper County, Virginia, 1861-1865, Army life in Virginia, Gettysburg; stories of the red harvest and the aftermath, The Boy General: Story of the Life of Major-General George A. Custer, "Boots and Saddles" Or, Life in Dakota with General Custer, A Complete History of the Spanish-American War of 1898, General Pershing's Official Story of the American Expeditionary Forces in France, Letters of an American Airman: Being the War Record of Capt. Hamilton Coolidge, U.S.A., 1917-1918, and The Eclipse of American Sea Power.

Trieste Publishing's aim is to provide readers with the highest quality reproductions of fiction and non-fiction literature that has stood the test of time. Our titles are produced from scans of the original books and as a result may sometimes have imperfections. To ensure a high-quality product we have:

You can look up "Trieste Publishing" in categories that interest you to find other titles in our large collection.

Come home to the books that made a difference

This feature require that you enable JavaScript in your browser.
END_OF_DOCUMENT_TOKEN_TO_BE_REPLACED

This feature require that you enable JavaScript in your browser.
END_OF_DOCUMENT_TOKEN_TO_BE_REPLACED

This feature require that you enable JavaScript in your browser.
END_OF_DOCUMENT_TOKEN_TO_BE_REPLACED