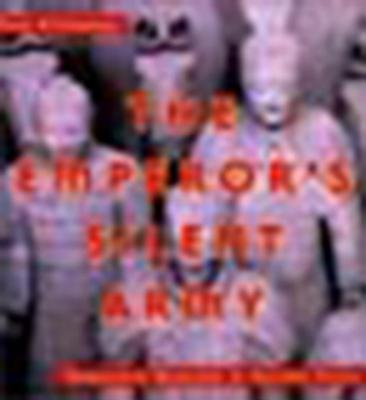 Three farmers are digging a well when suddenly their shovels hit something hard. It is a clay head of a mad who stares back at them, open-eyed and amazingly real looking. The farmers have never seen anything like it; neither have the archeologists who arrive and being to uncover more and more pottery men—first dozens, then hundres and eventually thousands! Buried for more than 2,200 years, they are soldiers, life-size as well as life-like, and they stand at attention as if waiting for the command to charge into battle. The only thing missing is their weapons, and soon those are found too—thousands of real bronze swords, daggers, and arrowheads still so sharp they can split a hair.

Now, after almost thirty years of ongoing excavation, a buried army of 7,500 terracotta soldiers and horses has emerged. And this site that three farmers accidentally stumbled upon ranks along with the Great Pyramids in Egypt as one of the true wonders of the ancient world.

The Emperor's Silent Army features more than forty full-color photos that showcase the terracotta troops. A vivid and engaging text tells all about the army as well as the extraordinary story of the men who commanded its creation—the ruthless and tyrannical first emperor of China.

This feature require that you enable JavaScript in your browser.
END_OF_DOCUMENT_TOKEN_TO_BE_REPLACED

This feature require that you enable JavaScript in your browser.
END_OF_DOCUMENT_TOKEN_TO_BE_REPLACED

This feature require that you enable JavaScript in your browser.
END_OF_DOCUMENT_TOKEN_TO_BE_REPLACED