A Fortunate Man: The Story of a Country Doctor (Vintage International) (Paperback) 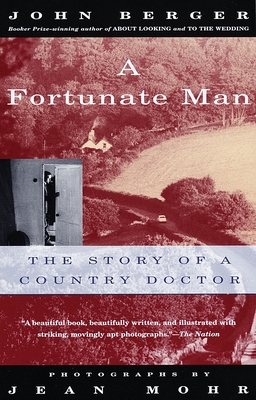 By John Berger
$15.00
Backordered - OK to 'add to cart' and we'll let you know when your copy is here

In this quietly revolutionary work of social observation and medical philosophy, Booker Prize-winning writer John Berger and the photographer Jean Mohr train their gaze on an English country doctor and find a universal man--one who has taken it upon himself to recognize his patient's humanity when illness and the fear of death have made them unrecognizable to themselves. In the impoverished rural community in which he works, John Sassall tend the maimed, the dying, and the lonely. He is not only the dispenser of cures but the repository of memories. And as Berger and Mohr follow Sassall about his rounds, they produce a book whose careful detail broadens into a meditation on the value we assign a human life. First published thirty years ago, A Fortunate Man remains moving and deeply relevant--no other book has offered such a close and passionate investigation of the roles doctors play in their society.

"In contemporary letters John Berger seems to me peerless; not since Lawrence has there been a writer who offers such attentiveness to the sensual world with responsiveness to the imperatives of conscience." --Susan Sontag

John Berger was born in London in 1926. He is well known for his novels and stories as well as for his works of nonfiction, including several volumes of art criticism. His first novel, A Painter of Our Time, was published in 1958, and since then his books have included Ways of Seeing, the fiction trilogy Into Their Labours, and the novel G., which won the Booker Prize in 1972. In 1962 he left Britain permanently, and lived in a small village in the French Alps. He died in 2017.

This feature require that you enable JavaScript in your browser.
END_OF_DOCUMENT_TOKEN_TO_BE_REPLACED

This feature require that you enable JavaScript in your browser.
END_OF_DOCUMENT_TOKEN_TO_BE_REPLACED

This feature require that you enable JavaScript in your browser.
END_OF_DOCUMENT_TOKEN_TO_BE_REPLACED