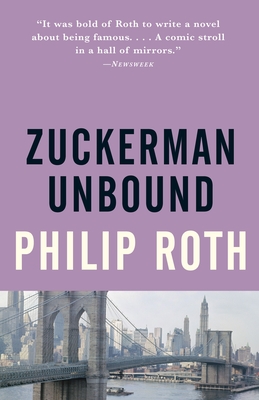 Now in his mid-thirties, Nathan Zuckerman, a would-be recluse despite his newfound fame as a bestselling author, ventures onto the streets of Manhattan in the final year of the turbulent sixties. Not only is he assumed by his fans to be his own fictional satyr, Gilbert Carnovsky ("Hey, you do all that stuff in that book?"), but he also finds himself the target of admonishers, advisers, and sidewalk literary critics. The recent murders of Robert Kennedy and Martin Luther King, Jr., lead an unsettled Zuckerman to wonder if "target" may be more than a figure of speech.

In Zuckerman Unbound—the second volume of the trilogy and epilogue Zuckerman Bound—the notorious novelist Nathan Zuckerman retreats from his oldest friends, breaks his marriage to a virtuous woman, and damages, perhaps irreparably, his affectionate connection to his younger brother...and all because of his great good fortune!

"It was bold of Roth to write a novel about being famous...a comic stroll in a hall of mirrors." —Newsweek

"[Roth's] narrative hand is wonderfully sure, his comic timing worthy of the Ritz Brothers.... Not since Henry MIller has anyone learned to be as funny and compassionate and brutal and plaintive in the space of a paragraph." —Village Voice

"Zuckerman Unbound is masterful, sure in every touch, as clear and economical of line as a crystal vase." —The New York TImes Book Review

This feature require that you enable JavaScript in your browser.
END_OF_DOCUMENT_TOKEN_TO_BE_REPLACED

This feature require that you enable JavaScript in your browser.
END_OF_DOCUMENT_TOKEN_TO_BE_REPLACED

This feature require that you enable JavaScript in your browser.
END_OF_DOCUMENT_TOKEN_TO_BE_REPLACED