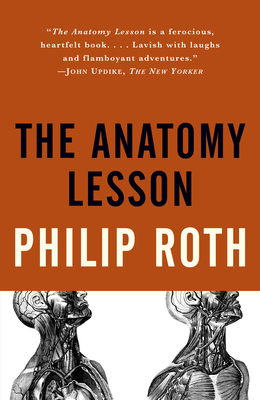 At forty, the writer Nathan Zuckerman comes down with a mysterious affliction—pure pain, beginning in his neck and shoulders, invading his torso, and taking possession of his spirit. Zuckerman, whose work was his life, is unable to write a line. Now his work is trekking from one doctor to another, but none can find a cause for the pain and nobody can assuage it. Zuckerman himself wonders if the pain can have been caused by his own books. And while he is wondering, his dependence on painkillers grows into an addiction to vodka, marijuana, and Percodan.

The Anatomy Lesson is a great comedy of illness written in what the English critic Hermione Lee has described as "a manner at once...brash and thoughtful... lyrical and wry, which projects through comic expostulations and confessions...a knowing, humane authority." The third volume of the trilogy and epilogue Zuckerman Bound, The Anatomy Lesson provides some of the funniest scenes in all of Roth's fiction as well as some of the fiercest.

"The Anatomy Lesson is a ferocious, heartfelt book...lavish with laughs and flamboyant inventions." —John Updike, The New Yorker

"Roth has a genius for the comedy of entrapment.... [He] writes America's most raucously funny novels." —Time

"One of Roth's most unsparing and revealing books...forceful and startling." —Newsday

This feature require that you enable JavaScript in your browser.
END_OF_DOCUMENT_TOKEN_TO_BE_REPLACED

This feature require that you enable JavaScript in your browser.
END_OF_DOCUMENT_TOKEN_TO_BE_REPLACED

This feature require that you enable JavaScript in your browser.
END_OF_DOCUMENT_TOKEN_TO_BE_REPLACED