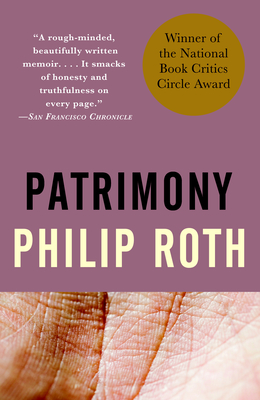 Patrimony, a true story, touches the emotions as strongly as anything Philip Roth has ever written. Roth watches as his eighty-six-year-old father—famous for his vigor, charm, and his repertoire of Newark recollections—battles with the brain tumor that will kill him. The son, full of love, anxiety, and dread, accompanies his father through each fearful stage of his final ordeal, and, as he does so, discloses the survivalist tenacity that has distinguished his father's long, stubborn engagement with life.

"A tough-minded, beautifully written memoir. . . . It smacks of honesty and truthfulness on every page." —San Francisco Chronicle

"A deeply resonant portrait of a father and son. . . . Roth has looked past all comfort and condolence to find the truth—about himself and his father; about death and the fear of it; and about the absolute vulnerability to which love condemns us all." —Chicago Tribune

"In a cunningly straightforward way, Patrimony tells one of the central true stories many Americans share nowadays. . . . Such telling is a marvel of artful wit and vigor. . . . It is the triumphant art of the literal . . . the gloriously pragmatic, unpredictable genius of Philip Roth's narrative gifts." —The New York Times Book Review

This feature require that you enable JavaScript in your browser.
END_OF_DOCUMENT_TOKEN_TO_BE_REPLACED

This feature require that you enable JavaScript in your browser.
END_OF_DOCUMENT_TOKEN_TO_BE_REPLACED

This feature require that you enable JavaScript in your browser.
END_OF_DOCUMENT_TOKEN_TO_BE_REPLACED