The Torrents of Spring: The Authorized Edition (Paperback) 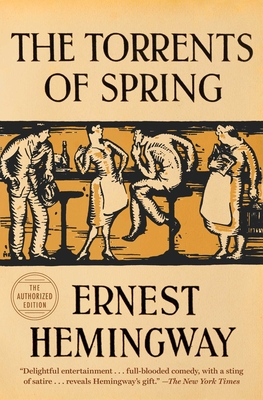 An early gem of satire and humor from the greatest American writer of the twentieth century.

First published in 1926, The Torrents of Spring is a hilarious parody of the Chicago school of literature. Poking fun at that "great race" of writers, it depicts a vogue that Hemingway himself refused to follow. In style and substance, The Torrents of Spring is a burlesque of Sherwood Anderson's Dark Laughter, but in the course of the narrative, other literary tendencies associated with American and British writers akin to Anderson—such as D. H. Lawrence, James Joyce, and John Dos Passos—come in for satirical comment. A highly entertaining story, The Torrents of Spring offers a rare glimpse into Hemingway's early career as a storyteller and stylist.

This feature require that you enable JavaScript in your browser.
END_OF_DOCUMENT_TOKEN_TO_BE_REPLACED

This feature require that you enable JavaScript in your browser.
END_OF_DOCUMENT_TOKEN_TO_BE_REPLACED

This feature require that you enable JavaScript in your browser.
END_OF_DOCUMENT_TOKEN_TO_BE_REPLACED