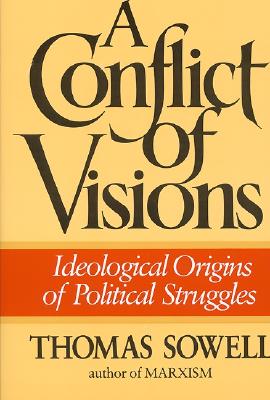 Controversies in politics arise from many sources, but the conflicts that endure for generations or for centuries show a remarkably consistent pattern. The analysis of this pattern is the purpose of "A Conflict of Visions. "its theme is that the enduring political controversies of the past two centuries reflect radically different visions of the nature of man. Issues as diverse as criminal justice, income distribution, or war and peace repeatedly show those with one vision lining up on one side and those with another vision lining up on the other.

Dr. Thomas Sowell describes "A Conflict of Visions "as "the culmination of thirty years of work in the history of ideas"--a field in which he established his professional reputation years before writing any of his well-known books on ethnicity and other social issues. Dr. Sowell and his books have received a nember of awards and honors, and have been translated into several languages. He has been a consultant to three administrations of both parties, as well as scholar-in-residence at three "think tanks." He is now a Senior Fellow at the Hoover Institute in Stanford, California.

This feature require that you enable JavaScript in your browser.
END_OF_DOCUMENT_TOKEN_TO_BE_REPLACED

This feature require that you enable JavaScript in your browser.
END_OF_DOCUMENT_TOKEN_TO_BE_REPLACED

This feature require that you enable JavaScript in your browser.
END_OF_DOCUMENT_TOKEN_TO_BE_REPLACED