Understanding Emerson: "the American Scholar" and His Struggle for Self-Reliance (Hardcover) 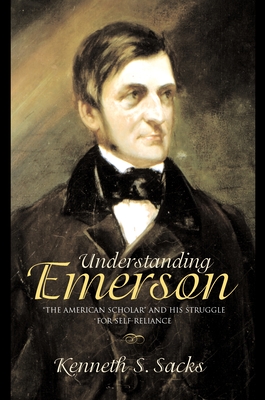 By Kenneth S. Sacks
Email or call for price.
Usually Ships in 1-5 Days

A seminal figure in American literature and philosophy, Ralph Waldo Emerson is considered the apostle of self-reliance, fully alive within his ideas and disarmingly confident about his innermost thoughts. Yet the circumstances around The American Scholar oration--his first great public address and the most celebrated talk in American academic history--suggest a different Emerson. In Understanding Emerson, Kenneth Sacks draws on a wealth of contemporary correspondence and diaries, much of it previously unexamined, to reveal a young intellectual struggling to define himself and his principles.

Caught up in the fierce dispute between his Transcendentalist colleagues and Harvard, the secular bastion of Boston Unitarianism and the very institution he was invited to honor with the annual Phi Beta Kappa address, Emerson agonized over compromising his sense of self-reliance while simultaneously desiring to meet the expectations of his friends. Putting aside self-doubts and a resistance to controversy, in the end he produced an oration of extraordinary power and authentic vision that propelled him to greater awareness of social justice, set the standard for the role of the intellectual in America, and continues to point the way toward educational reform. In placing this singular event within its social and philosophical context, Sacks opens a window into America's nineteenth-century intellectual landscape as well as documenting the evolution of Emerson's idealism.

Engagingly written, this book, which includes the complete text of The American Scholar, allows us to appreciate fully Emerson's brilliant rebuke of the academy and his insistence that the most important truths derive not from books and observation but from intuition within each of us. Rising defiantly before friend and foe, Emerson triumphed over his hesitations, redirecting American thought and pedagogy and creating a personal tale of quiet heroism.

Kenneth S. Sacks is Professor of History at Brown University. His books include Diodorus Siculus and the First Century (Princeton) and Polybius on the Writing of History.