A Shoemaker's Story: Being Chiefly about French Canadian Immigrants, Enterprising Photographers, Rascal Yankees, and Chinese Cobblers in a (Hardcover) 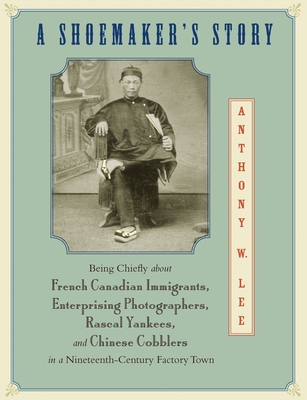 By Anthony W. Lee
Email or call for price.
usually available in 3-7 days

On a June morning in 1870, seventy-five Chinese immigrants stepped off a train in the New England factory town of North Adams, Massachusetts, imported as strikebreakers by the local shoe manufacturer. They threaded their way through a hostile mob and then--remarkably--their new employer lined them up along the south wall of his factory and had them photographed as the mob fell silent. So begins A Shoemaker's Story. Anthony Lee seeks to understand the social forces that brought this now-famous photograph into being, and the events and images it subsequently spawned. He traces the rise of photography as a profession and the hopes and experiences of immigrants trying to find their place in the years following the Civil War. He describes the industrialization of the once-traditional craft of shoemaking, and the often violent debates about race, labor, class, and citizenship that industrialization caused.

Generously illustrated with many extraordinary photographs, A Shoemaker's Story brings 1870s America to vivid life. Lee's spellbinding narrative interweaves the perspectives of people from very different walks of life--the wealthy factory owner who dared to bring the strikebreakers to New England, the Chinese workers, the local shoemakers' union that did not want them there, the photographers themselves, and the ordinary men and women who viewed and interpreted their images. Combining painstaking research with world-class storytelling, Lee illuminates an important episode in the social history of the United States, and reveals the extent to which photographs can be sites of intense historical struggle.

This feature require that you enable JavaScript in your browser.
END_OF_DOCUMENT_TOKEN_TO_BE_REPLACED

This feature require that you enable JavaScript in your browser.
END_OF_DOCUMENT_TOKEN_TO_BE_REPLACED

This feature require that you enable JavaScript in your browser.
END_OF_DOCUMENT_TOKEN_TO_BE_REPLACED