The Story of America: Essays on Origins (Paperback) 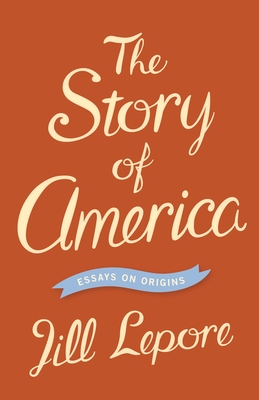 In The Story of America, Harvard historian and New Yorker staff writer Jill Lepore investigates American origin stories--from John Smith's account of the founding of Jamestown in 1607 to Barack Obama's 2009 inaugural address--to show how American democracy is bound up with the history of print. Over the centuries, Americans have read and written their way into a political culture of ink and type. Part civics primer, part cultural history, The Story of America excavates the origins of everything from the paper ballot and the Constitution to the I.O.U. and the dictionary. Along the way it presents fresh readings of Benjamin Franklin's Way to Wealth, Thomas Paine's Common Sense, The Raven by Edgar Allan Poe, and Paul Revere's Ride by Henry Wadsworth Longfellow, as well as histories of lesser-known genres, including biographies of presidents, novels of immigrants, and accounts of the Depression. From past to present, Lepore argues, Americans have wrestled with the idea of democracy by telling stories. In this thoughtful and provocative book, Lepore offers at once a history of origin stories and a meditation on storytelling itself.

Jill Lepore is the David Woods Kemper '41 Professor of American History at Harvard University and a staff writer at the "New Yorker." Her books include "The Mansion of Happiness," "The Whites of Their Eyes" (Princeton), and "Book of Ages: The Life and Opinions of Jane Franklin."

This feature require that you enable JavaScript in your browser.
END_OF_DOCUMENT_TOKEN_TO_BE_REPLACED

This feature require that you enable JavaScript in your browser.
END_OF_DOCUMENT_TOKEN_TO_BE_REPLACED

This feature require that you enable JavaScript in your browser.
END_OF_DOCUMENT_TOKEN_TO_BE_REPLACED