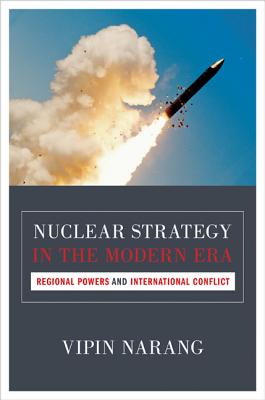 This is book number 143 in the Princeton Studies in International History and Politics series.

The world is in a second nuclear age in which regional powers play an increasingly prominent role. These states have small nuclear arsenals, often face multiple active conflicts, and sometimes have weak institutions. How do these nuclear states-and potential future ones-manage their nuclear forces and influence international conflict? Examining the reasoning and deterrence consequences of regional power nuclear strategies, this book demonstrates that these strategies matter greatly to international stability and it provides new insights into conflict dynamics across important areas of the world such as the Middle East, East Asia, and South Asia.

Vipin Narang identifies the diversity of regional power nuclear strategies and describes in detail the posture each regional power has adopted over time. Developing a theory for the sources of regional power nuclear strategies, he offers the first systematic explanation of why states choose the postures they do and under what conditions they might shift strategies. Narang then analyzes the effects of these choices on a state's ability to deter conflict. Using both quantitative and qualitative analysis, he shows that, contrary to a bedrock article of faith in the canon of nuclear deterrence, the acquisition of nuclear weapons does not produce a uniform deterrent effect against opponents. Rather, some postures deter conflict more successfully than others. Nuclear Strategy in the Modern Era considers the range of nuclear choices made by regional powers and the critical challenges they pose to modern international security.

Vipin Narang is the Frank Stanton Professor of Nuclear Security and Political Science and a member of the Security Studies Program at the Massachusetts Institute of Technology.

This feature require that you enable JavaScript in your browser.
END_OF_DOCUMENT_TOKEN_TO_BE_REPLACED

This feature require that you enable JavaScript in your browser.
END_OF_DOCUMENT_TOKEN_TO_BE_REPLACED

This feature require that you enable JavaScript in your browser.
END_OF_DOCUMENT_TOKEN_TO_BE_REPLACED