The Promise and Peril of Credit: What a Forgotten Legend about Jews and Finance Tells Us about the Making of European Commercial Society (Histories of Economic Life #19) (Paperback) 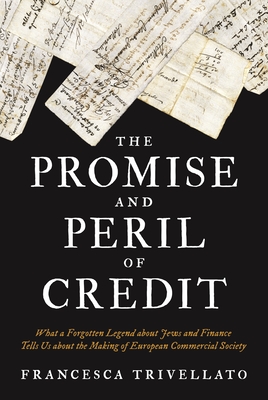 The Promise and Peril of Credit takes an incisive look at pivotal episodes in the West's centuries-long struggle to define the place of private finance in the social and political order. It does so through the lens of a persistent legend about Jews and money that reflected the anxieties surrounding the rise of impersonal credit markets. By the close of the Middle Ages, new and sophisticated credit instruments made it easier for European merchants to move funds across the globe. Bills of exchange were by far the most arcane of these financial innovations. Intangible and written in a cryptic language, they fueled world trade but also lured naive investors into risky businesses. Francesca Trivellato recounts how the invention of these abstruse credit contracts was falsely attributed to Jews, and how this story gave voice to deep-seated fears about the unseen perils of the new paper economy. She locates the legend's earliest version in a seventeenth-century handbook on maritime law and traces its legacy all the way to the work of the founders of modern social theory--from Marx to Weber and Sombart. Deftly weaving together economic, legal, social, cultural, and intellectual history, Trivellato vividly describes how Christian writers drew on the story to define and redefine what constituted the proper boundaries of credit in a modern world increasingly dominated by finance.

Francesca Trivellato is professor in the School of Historical Studies at the Institute for Advanced Study in Princeton. She is the author of The Familiarity of Strangers: The Sephardic Diaspora, Livorno, and Cross-Cultural Trade in the Early Modern Period.

This feature require that you enable JavaScript in your browser.
END_OF_DOCUMENT_TOKEN_TO_BE_REPLACED

This feature require that you enable JavaScript in your browser.
END_OF_DOCUMENT_TOKEN_TO_BE_REPLACED

This feature require that you enable JavaScript in your browser.
END_OF_DOCUMENT_TOKEN_TO_BE_REPLACED