The Stone Eagle: Episode I (Paperback) 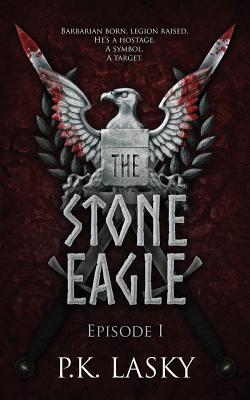 Matthi the Goth has spent six years inside a frontier military garrison, held hostage by the same Roman legion that saved him from an innocent boyhood mistake and the brutal justice of the Angel of Death.

He trains alongside highborn sons of the empire and sees his future within their ranks, but he is not a Roman citizen. He's called a savage, the teenage son of the only man who can unite the hostile northland barbarian clans. For some, this makes Matthi a symbol of unity. For others, he's a powerful bartering chip.

As famine crushes Lower Moesia, barbarian kings battle Roman generals, noblemen scheme for control of the territory, and Matthi must decide who he can trust, and who he must fight, in a web of betrayal, blood and lies.

The Stone Eagle is a historical action adventure series for young adult readers of any age. Each 20K word episode is a complete story that furthers the saga of the ancient Germanic Goth barbarians on the frontier of the crumbling Late Roman Empire.

This feature require that you enable JavaScript in your browser.
END_OF_DOCUMENT_TOKEN_TO_BE_REPLACED

This feature require that you enable JavaScript in your browser.
END_OF_DOCUMENT_TOKEN_TO_BE_REPLACED

This feature require that you enable JavaScript in your browser.
END_OF_DOCUMENT_TOKEN_TO_BE_REPLACED