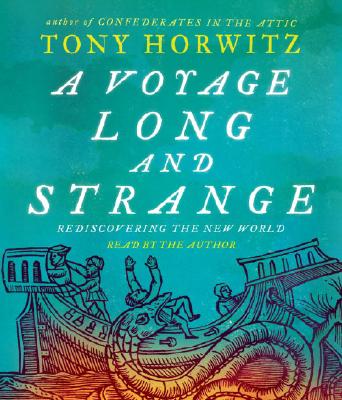 On a chance visit to Plymouth Rock, Tony Horwitz makes an unsettling discovery. A history buff since early childhood, expensively educated at university—a history major, no less!—he’s reached middle age with a third-grader’s grasp of early America. In fact, he’s mislaid more than a century of American history, the period separating Columbus’s landing in 1492 from the arrival of English colonists at Jamestown in 160-something. Did nothing happen in between?

Horwitz decides to find out, and in A Voyage Long and Strange he uncovers the neglected story of America’s founding by Europeans. He begins a thousand years ago, with the Vikings, and then tells the dramatic tale of conquistadors, castaways, French voyageurs, Moorish slaves, and many others who roamed and rampaged across half the states of the present-day U.S. continent, long before the Mayflower landed.

To explore this history and its legacy in the present, Horwitz embarks on an epic quest of his own—trekking in search of grape-rich Vinland, Ponce de León’s Fountain of Youth, Coronado’s Cities of Gold, Walter Raleigh’s Lost Colonists, and other mysteries of early America. And everywhere he goes, Horwitz probes the revealing gap between fact and legend, between what we enshrine and what we forget.

An irresistible blend of history, myth, and misadventure, A Voyage Long and Strange allows us to rediscover the New World for ourselves.

Tony Horwitz is the bestselling author of "Blue Latitudes, Confederates in the Attic, " and "Baghdad Without a Map." He is also a Pulitzer Prize--winning journalist who has worked for "The Wall Street Journal" and "The New Yorker." He lives in Massachusetts with his wife, Geraldine Brooks, and their son, Nathaniel.

This feature require that you enable JavaScript in your browser.
END_OF_DOCUMENT_TOKEN_TO_BE_REPLACED

This feature require that you enable JavaScript in your browser.
END_OF_DOCUMENT_TOKEN_TO_BE_REPLACED

This feature require that you enable JavaScript in your browser.
END_OF_DOCUMENT_TOKEN_TO_BE_REPLACED