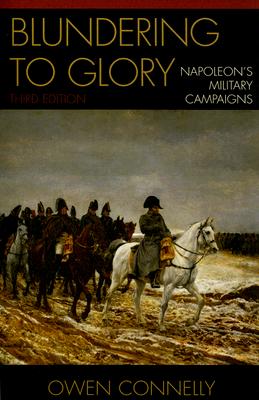 By Owen Connelly
Email or call for price.

Renowned for its accuracy, brevity, and readability, this book has long been the gold standard of concise histories of the Napoleonic Wars. Now in an updated and revised edition, it is unique in its portrayal of one of the world's great generals as a scrambler who never had a plan, strategic or tactical, that did not break down or change of necessity in the field. Distinguished historian Owen Connelly argues that Napoleon was the master of the broken play, so confident of his ability to improvise, cover his own mistakes, and capitalize on those of the enemy that he repeatedly plunged his armies into uncertain, seemingly desperate situations, only to emerge victorious as he blundered to glory. Beginning with a sketch of Napoleon's early life, the book progresses to his command of artillery at Toulon and the whiff of grapeshot in Paris that netted him control of the Army of Italy, where his incredible performance catapulted him to fame. The author vividly traces Napoleon's campaigns as a general of the French Revolution and emperor of the French, knowledgeably analyzing each battle's successes and failures. The author depicts Napoleon's art of war as a system of engaging the enemy, waiting for him to make a mistake, improvising a plan on the spot-and winning. Far from detracting from Bonaparte's reputation, his blunders rather made him a great general, a natural who depended on his intuition and ability to read battlefields and his enemy to win. Exploring this neglected aspect of Napoleon's battlefield genius, Connelly at the same time offers stirring and complete accounts of all the Napoleonic campaigns.

Owen Connelly is McKissick Dial Professor of History at the University of South Carolina. He is the author of On War and Leadership, Napoleon's Satellite Kingdoms, and The French Revolution and Napoleonic Era. He is a member of the Institute for Advanced Studies, Princeton University and past president of the Society for French Historical Studies. He served as an infantry officer in the Korean War and as an instructor at the U.S. Army Florida Ranger Camp.

This feature require that you enable JavaScript in your browser.
END_OF_DOCUMENT_TOKEN_TO_BE_REPLACED

This feature require that you enable JavaScript in your browser.
END_OF_DOCUMENT_TOKEN_TO_BE_REPLACED

This feature require that you enable JavaScript in your browser.
END_OF_DOCUMENT_TOKEN_TO_BE_REPLACED