MacArthur's War: Korea and the Undoing of an American Hero (Paperback) 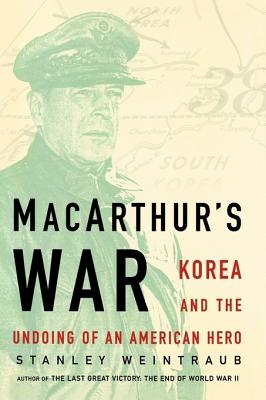 By Stanley Weintraub
$16.00
Special Order - may be out of print

In a dramatic chronicle of an almost forgotten war, Stanley Weintraub reveals why the most famous American general of the twentieth century failed to grasp the realities of the Korean conflict and its political repercussions. Focusing on MacArthur's leadership of the U.N. forces during the bloody summer of 1950 and beyond, Weintraub portrays an arrogant and failing autocrat more concerned with his own image than with military strategies.

Weintraub's descriptions of fellow officers, ordinary soldiers, and civilian reporters at the mercy of MacArthur's rule add a moving dimension to a seminal study of a highly flawed American legend. His original research makes it clear that MacArthur's gross insubordination and persistent attempts to extend the conflict into mainland China, not his call for the use of nuclear weapons, made his downfall inevitable.

This feature require that you enable JavaScript in your browser.
END_OF_DOCUMENT_TOKEN_TO_BE_REPLACED

This feature require that you enable JavaScript in your browser.
END_OF_DOCUMENT_TOKEN_TO_BE_REPLACED

This feature require that you enable JavaScript in your browser.
END_OF_DOCUMENT_TOKEN_TO_BE_REPLACED