The Garden of Eden (CD-Audio) 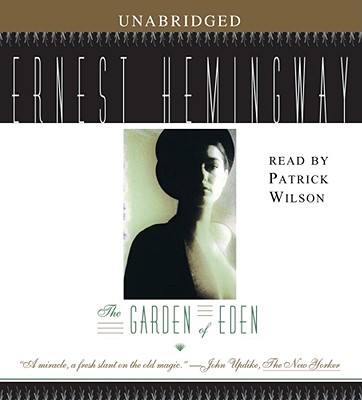 The last uncompleted novel of Ernest Hemingway, published posthumously in 1986, charts the life of a young American writer and his glamorous wife who fall for the same woman.

Patrick Wilson has starred on Broadway in Barefoot in the Park, Oklahoma! (Tony Award nominated), and The Full Monty (Tony nomination, Drama League Award). His film credits include Little Children, Phantom of the Opera, Hard Candy, and the HBO Mini series Angels in America (Golden Globe and Emmy nominations).

"Hemingway's farewell, mannered, thrilling, spoiled, pure, loyal to its monumental maker and itself and with no knowledge of coming darkness." -- James Salter, The Washington Post Book World

"Hemingway gives you the look and feel of places, the sensuous brilliance of the world's offerings, the excitement of complex relationships, the precision of a hunt or a breakfast, the tensions of sexual intrigue . . . In short, The Garden of Eden is a feast." -- Richard Stern, Chicago Tribune Books

"A miracle, a fresh slant on the old magic." -- John Updike, The New Yorker

This feature require that you enable JavaScript in your browser.
END_OF_DOCUMENT_TOKEN_TO_BE_REPLACED

This feature require that you enable JavaScript in your browser.
END_OF_DOCUMENT_TOKEN_TO_BE_REPLACED

This feature require that you enable JavaScript in your browser.
END_OF_DOCUMENT_TOKEN_TO_BE_REPLACED