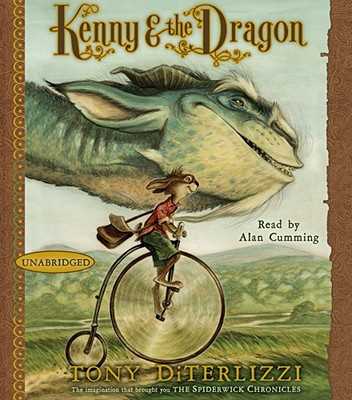 “A fabulous fantasy/morality tale for all ages that covers friends, rumors, and intolerance -- and the good guys win in the end. It will become a classic.”
— Liz Murphy, Learned Owl Book Shop, Hudson, OH

Now in paperback, the New York Times bestselling tale of chivalry and showmanship from Tony DiTerlizzi.

Kenny is a little rabbit with a very big problem. His two best friends are heading into a battle of legendary proportions—with each other! In one corner there’s Graeme, a well-read and cultured dragon with sophisticated tastes. In the other there’s George, a retired knight and dragon slayer who would be content to spend the rest of his days in his bookshop. Neither really wants to fight, but the village townsfolk are set on removing Graeme from their midst and calling George out of retirement. Can Kenny avert disaster?

Tony DiTerlizzi puts a fun-filled, thoroughly theatrical spin on Kenneth Graeme’s classic tale of subterfuge and showmanship with this lighthearted romp of a retelling.

Tony DiTerlizzi is a New York Times bestselling author and illustrator who has been creating books with Simon & Schuster for fifteen years. From his fanciful picture books like Jimmy Zangwow’s Out-of-this-World Moon Pie Adventure, Adventure of Meno (with his wife, Angela), and The Spider & The Fly (a Caldecott Honor book), to chapter books like Kenny and The Dragon and The Search for WondLa, Tony always imbues his stories with a rich imagination. His middle grade series, The Spiderwick Chronicles (with Holly Black), has sold millions of copies, been adapted into a feature film, and has been translated in more than thirty countries. You can visit him at DiTerlizzi.com.

This feature require that you enable JavaScript in your browser.
END_OF_DOCUMENT_TOKEN_TO_BE_REPLACED

This feature require that you enable JavaScript in your browser.
END_OF_DOCUMENT_TOKEN_TO_BE_REPLACED

This feature require that you enable JavaScript in your browser.
END_OF_DOCUMENT_TOKEN_TO_BE_REPLACED