The Man Who Fell From the Sky: The Bizarre Life and Death of '20s Tycoon Alfred Loewenstein (Large Print / Paperback) 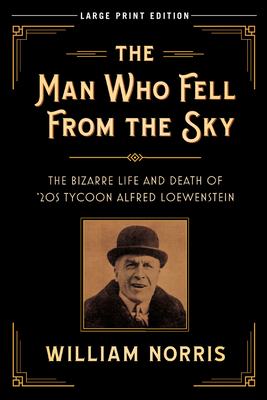 How a multi-millionaire vanished into thin air.

Captain Alfred Loewenstein was known as many things during his glamorous and gaudy life. Companion of the Bath, friend of kings, an aviator and sportsman, a maker and loser of fortunes, and most favorably, a multi-millionaire. That is, until his mysterious death.

On a July evening in 1928, Loewenstein boarded his aircraft with six others to travel from England to Brussels. He never arrived. While flying over the English Channel, Loewenstein fell through an exit door of the airplane on his way to the lavatory.

People were quick to explain his mysterious death. Many said his fall was an accident while others speculated that he jumped from the plane to commit suicide. And of course, there were the more sinister theories claiming that someone pushed him out of the aircraft. But who? And why?

Investigative journalist William Norris develops a theory of how and why this prominent, rich, and famous man died so violently without any explanation or official investigation. Did Loewenstein fall, did he jump, or was he pushed from his own aircraft?

The Man Who Fell From the Sky contains excitement and mystery as Norris researches the business tycoon’s life, death, and aftermath of his demise and comes to a conclusion of how Alfred Loewenstein vanished into thin air.

William (Bill) Norris spent more than ten years working for various newspapers in England and Africa before his appointment as Parliamentary Correspondent to the prestigious Times of London. Afterward, as the Africa Correspondent for The Times, he covered a wide range of political beats in Biafra, Nigeria, Angola, the Congo, Mozambique, Botswana, Zambia, Tanzania, and Zimbabwe. He went on to counsel young journalists as the Associate Director of the PressWise Trust (a British media ethics charity) and present at colleges and conferences for many years, publishing numerous works of fiction and nonfiction inspired by his investigative journalism. He now resides in the South of France with his wife Betty, two cats, and two exhausting dogs.

This feature require that you enable JavaScript in your browser.
END_OF_DOCUMENT_TOKEN_TO_BE_REPLACED

This feature require that you enable JavaScript in your browser.
END_OF_DOCUMENT_TOKEN_TO_BE_REPLACED

This feature require that you enable JavaScript in your browser.
END_OF_DOCUMENT_TOKEN_TO_BE_REPLACED