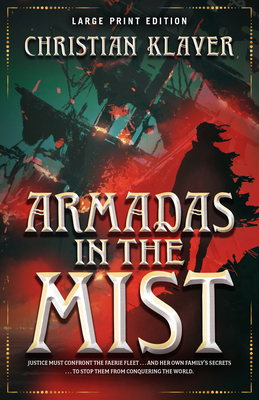 The Black Shuck’s forces gather just beyond the mist . . .

Captain Justice Kasric knows how complicated family can be. The escalating Human-Faerie war has scattered and wounded her siblings and transformed her parents beyond recognition. After narrowly escaping yet another dangerous clash, fifteen-year-old Justice has had enough. She’s determined to defeat the Black Shuck, the mysterious leader controlling the Faerie invasion of London, but if Justice hopes to stand a chance at victory, she’ll have to do the impossible: reunite her family and lead them against the looming Faerie Armada.

With her mother and brother at the helm of the enemy fleet, and the prophesized Seven Virtues slipping out of reach, Justice more than has her work cut out for her. Even if she can save England, the cost may be higher than she’s willing to pay.

Christian Klaver has been writing for over twenty years, with a number of magazine publications, including Escape Pod, Dark Wisdom Anthology, and Anti-Matter. He’s the author of The Supernatural Case Files of Sherlock Holmes series, but has written over a dozen novels, both fantasy and sci-fi, often with a Noir bent. He's worked as book-seller, bartender and a martial-arts instructor before settling into a career in internet security. He lives just outside the sprawling decay of Detroit, Michigan, with his wife, Kimberly, his daughter, Kathryn, and a group of animals he refers to as The Menagerie. He’s also a part of the Untitled Writer’s Group based in Ann Arbor for the past decade or so with a bunch of equally starry-eyed dreamers and social misanthropes.

This feature require that you enable JavaScript in your browser.
END_OF_DOCUMENT_TOKEN_TO_BE_REPLACED

This feature require that you enable JavaScript in your browser.
END_OF_DOCUMENT_TOKEN_TO_BE_REPLACED

This feature require that you enable JavaScript in your browser.
END_OF_DOCUMENT_TOKEN_TO_BE_REPLACED