What-the-Dickens: The Story of a Rogue Tooth Fairy (Mass Market) 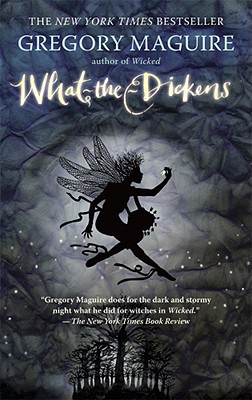 By Gregory Maguire
$6.99
Special Order - may be out of print

"Gregory Maguire does for the dark and stormy night what he did for witches in Wicked." — THE NEW YORK TIMES BOOK REVIEW

A terrible storm is raging, and Dinah is huddled by candlelight with her brother, sister, and cousin Gage, who is telling a very unusual tale. It’s thestory of What-the-Dickens, a newly hatched orphan creature who finds he has an attraction to teeth, a crush on a cat named McCavity, and a penchant for getting into trouble. One day he happens upon a feisty girl skibberee working as an Agent of Change — trading coins for teeth — and learns of a dutiful tribe of tooth fairies to which he hopes to belong. As his tale unfolds, however, both What-the-Dickens and Dinah come to see that the world is both richer and far less sure than they ever imagined.

Gregory Maguire is the author of more than a dozen novels for children as well as four adult novels, including WICKED: THE LIFE AND TIMES OF THE WICKED WITCH OF THE WEST, which was made into a hit Broadway musical. He lives outside Boston, Massachusetts.

This feature require that you enable JavaScript in your browser.
END_OF_DOCUMENT_TOKEN_TO_BE_REPLACED

This feature require that you enable JavaScript in your browser.
END_OF_DOCUMENT_TOKEN_TO_BE_REPLACED

This feature require that you enable JavaScript in your browser.
END_OF_DOCUMENT_TOKEN_TO_BE_REPLACED