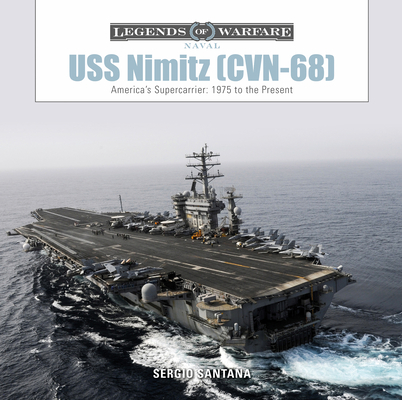 The nuclear-powered supercarrier USS Nimitz is the oldest carrier in the US fleet. Commissioned in 1975, CVN-68 is named after famed navy admiral Chester Nimitz and has been at the front line of many naval operations in its 40-plus years of service. Nimitz's design and development, construction, sea trials, commissioning, and first cruise are presented in concise, detailed text. Also covered are all of the ship's systems, including electronics, defensive/offensive armament, command and control, and aircraft launching and recovery. Nimitz's military campaigns--including the Gulf of Sidra Incident, Operation Desert Shield/Storm, and Operations Southern Watch, Enduring Freedom, and Iraqi Freedom--are also covered in detail, including their results. The book concludes with its latest operational deployment, Operation Inherent Resolve, and the ship's current status. Part of the Legends of Warfare series.

This feature require that you enable JavaScript in your browser.
END_OF_DOCUMENT_TOKEN_TO_BE_REPLACED

This feature require that you enable JavaScript in your browser.
END_OF_DOCUMENT_TOKEN_TO_BE_REPLACED

This feature require that you enable JavaScript in your browser.
END_OF_DOCUMENT_TOKEN_TO_BE_REPLACED