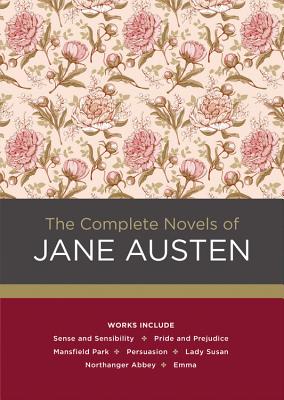 By Jane Austen
$14.99
Backordered - OK to 'add to cart' and we'll let you know when your copy is here

Jane Austen revolutionized the literary romance, using it as a platform from which to address issues of gender politics and class consciousness among the British middle-class of the late eighteenth century. The novels included in the collection - Sense and Sensibility, Pride and Prejudice, Mansfield Park, Emma, Northanger Abbey, Persuasion, and Lady Susan - represent all of Austen's complete novels, and provide the reader with an entrance into the world she and her memorable characters inhabited.

With witty, unflinching morality, Austen portrays English middle-class life as the eighteenth century came to a close and the nineteenth century began. Austen's heroines find happiness in many forms, each of the novels is a story of love and marriage -- marriage for love, financial security and for social status.

In a publishing career that spanned less than ten years her work brought her little personal fame and only a few positive reviews during her lifetime. It wasn't until the 1940s that she became widely accepted in academia as a great English writer. The second half of the 20th century saw a proliferation of Austen scholarship and the emergence of a fan culture. Austen's works continue to influence the course of the novel even as they charm readers today.

Essential volumes for the shelves of every classic literature lover, the Chartwell Classics series includes beautifully presented collections from some of the most important authors in literary history. Offering the most complete compilation of each set of works, Chartwell Classics are the editions of choice for the most discerning literature buffs.

Jane Austen (1775–1817) was an English novelist whose works of romantic fiction, set among the British middle class, earned her a place as one of the most widely read writers in English literature. Her realism and biting social commentary has gained her historical importance among scholars and critics, though her work brought her little personal fame and only a few positive reviews during her lifetime. Her plots, though fundamentally comic, highlight the dependence of women on marriage to secure social standing and economic security. Although Jane Austen wrote from her teenage years into her thirties, her most notable writing was done from 1811 until 1816. During this period she wrote and extensively revised three major novels and began a fourth, Sense and Sensibility (1811), Pride and Prejudice (1813), Mansfield Park (1814) and Emma (1816). She wrote two additional novels, Northanger Abbey and Persuasion, both published posthumously in 1818, and began a third, which was eventually titled Sanditon, but she died before completing it at the age of 41.

Jane Austen was born in 1775 at Steventon, Hampshire. She was the seventh child of the local rector and her life, by modern standards, was uneventful. In 1801 she moved with her parents to Bath but returned to Hampshire when her father died, settling in the village of Chawton. She remained there until 1817, when she moved to Winchester to be within easy reach of her doctor. She died that year, at age forty-one, and is buried in Winchester Cathedral, which also contains a plaque in honor of her memory. Four of her novels were published anonymously in her lifetime; two more, one of which was Persuasion, appeared posthumously.

This feature require that you enable JavaScript in your browser.
END_OF_DOCUMENT_TOKEN_TO_BE_REPLACED

This feature require that you enable JavaScript in your browser.
END_OF_DOCUMENT_TOKEN_TO_BE_REPLACED

This feature require that you enable JavaScript in your browser.
END_OF_DOCUMENT_TOKEN_TO_BE_REPLACED