Women at War: Gender Issues of Americans in Combat (Paperback) 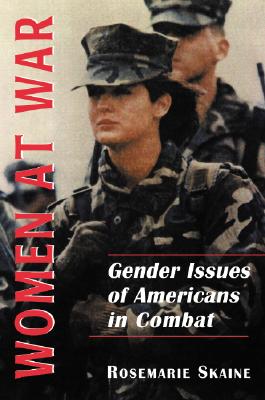 By Rosemarie Skaine
Email or call for price.

The Persian Gulf War changed the face of combat. It brought womens military roles into the spotlight, in large part via the mass media, and showed that many women performed combat roles similar to those of men during the conflict. The war was thus an impetus for changes in laws that had prevented women from serving in combat assignments. In past centuries, because it was not culturally acceptable for women to serve in combat, surprising numbers joined secretly under assumed male names. After defining exactly what is meant by "war" and "combat, " this work presents historical and present-day views of the involvement of women in the military. The impact of regulations on women in combat is analyzed, as is the role of the American public in the controversy. Female combat is put into context with sociological theory; also discussed are readiness, cohesion, ability, sexuality, equal opportunity and family issues.

The late Rosemarie Skaine was a sociologist and lived in Cedar Falls, Iowa. Her writing interests included families and women's issues.

This feature require that you enable JavaScript in your browser.
END_OF_DOCUMENT_TOKEN_TO_BE_REPLACED

This feature require that you enable JavaScript in your browser.
END_OF_DOCUMENT_TOKEN_TO_BE_REPLACED

This feature require that you enable JavaScript in your browser.
END_OF_DOCUMENT_TOKEN_TO_BE_REPLACED