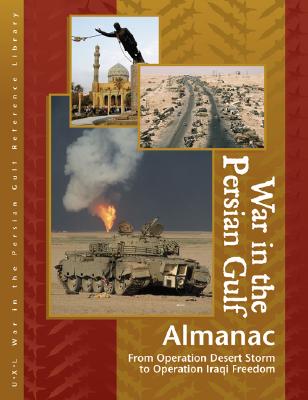 By Laurie Collier Hillstrom (Editor)
Email or call for price.

Triggered by its invasion of Kuwait, Iraq was pitted against a 32-nation coalition of forces commanded by Gen. Norman Schwarzkopf, whose air attacks led the way for a ground war that met with success in less than four days. Although the coalition was victorious, Saddam Hussein held on as president of Iraq. "Almanac and Primary Sources "covers the pre-war events; Operation Desert Shield, the U.S. effort to prevent an Iraqi invasion of Saudi Arabia; and Operation Desert Storm, the conflict that ended in the Iraqi defeat and the liberation of Kuwait." Biographies"offers approximately 25 biographies of major and less prominent figures. Included are 120 black-and-white illustrations with approximately 20 maps; chronology; sidebars; words to know; research and activity ideas; further reading; subject index; and more.

For table of contents, sample pages or other volume specific information see the entry for the Almanac, Biographies or Primary Sources.

This feature require that you enable JavaScript in your browser.
END_OF_DOCUMENT_TOKEN_TO_BE_REPLACED

This feature require that you enable JavaScript in your browser.
END_OF_DOCUMENT_TOKEN_TO_BE_REPLACED

This feature require that you enable JavaScript in your browser.
END_OF_DOCUMENT_TOKEN_TO_BE_REPLACED