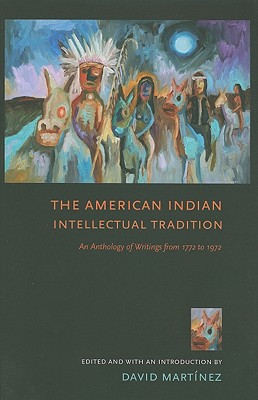 By David Martinez (Editor)
Email or call for price.

In The American Indian Intellectual Tradition, David Mart nez presents thirty-one essays that exemplify Native American intellectual culture across two centuries. The occasion for many of the pieces was the exertion of colonial and then federal power to limit or obliterate the authority and autonomy of American Indians. The writers featured were activists for their home communities and for all indigenous people.

Mart nez divides his book into three critical epochs of American Indian history with section introductions that provide political context for the selected readings. Works by Vine Deloria Jr., Elias Johnson, Laura Cornelius Kellogg, Susette La Flesche, D'Arcy McNickle, Samson Occom, John Ross, and twenty-one other writers and community leaders are accompanied by bibliographies. The essays display the diversity and sophistication of American Indian writers; although Mart nez's approach is pan-Indian, each author is situated in terms of his or her specific culture, politics, and historical context. At the same time, throughout the book there are significant recurring themes that enable the reader to appreciate the scope of the American Indian intellectual tradition and the common cultural standpoints that bind these various writers together.

This feature require that you enable JavaScript in your browser.
END_OF_DOCUMENT_TOKEN_TO_BE_REPLACED

This feature require that you enable JavaScript in your browser.
END_OF_DOCUMENT_TOKEN_TO_BE_REPLACED

This feature require that you enable JavaScript in your browser.
END_OF_DOCUMENT_TOKEN_TO_BE_REPLACED