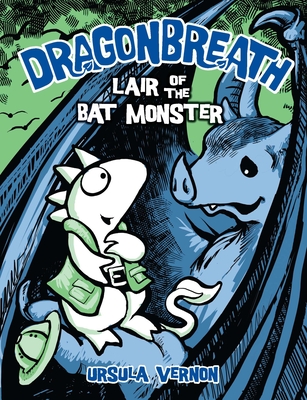 This is book number 4 in the Dragonbreath series.

“Animal Planet meets Bunnicula in this fourth installment in the Dragonbreath series. While deep in the Mexican jungle, Danny Dragonbreath is grabbed by a bat monster that is as big as a house. Will his nerdy, timid best friend, Wendell, be brave enough to save Danny before he's permanently adopted as a bat monster baby?”
— Ellen Klein, Hooray for Books!, Alexandria, VA

Danny Dragonbreath is hoping to see lots of cool bats when he and his best friend, Wendell, visit Danny's cousin, a bat specialist in Mexico. But he isn't expecting to get up close and personal with a giant bat monster, who kidnaps Danny and carries him off to her lair! Now nerdy Wendell will finally get a chance to be a hero . . . but only if he can hunt down the bat monster before she permanently adopts Danny as her bat monster baby.

Ursula Vernon has packed the fourth book in this laugh-until-smoke-comes-out-of-your-nose series with fantastic bat facts and hilarity of the highest order. Wimpy Kid fans everywhere will love this decidedly un-wimpy (but often unlucky!) dragon. Perfect for fans of Wimpy Kid and Bad Kitty.

This feature require that you enable JavaScript in your browser.
END_OF_DOCUMENT_TOKEN_TO_BE_REPLACED

This feature require that you enable JavaScript in your browser.
END_OF_DOCUMENT_TOKEN_TO_BE_REPLACED

This feature require that you enable JavaScript in your browser.
END_OF_DOCUMENT_TOKEN_TO_BE_REPLACED