A Spy Among Friends: Kim Philby and the Great Betrayal (Paperback) 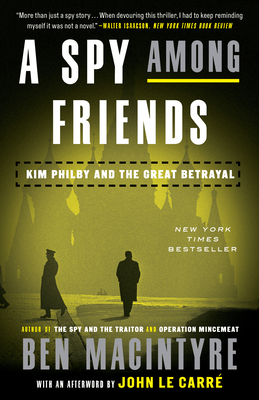 NEW YORK TIMES BESTSELLER • The epic true story of Kim Philby, the Cold War’s most infamous spy, from the “master storyteller” (San Francisco Chronicle) and author of Prisoners of the Castle.

Who was Kim Philby? Those closest to him—like his fellow MI6 officer and best friend since childhood, Nicholas Elliot, and the CIA’s head of counterintelligence, James Jesus Angleton—knew him as a loyal confidant and an unshakeable patriot. Philby was a brilliant and charming man who rose to head Britain’s counterintelligence against the Soviet Union. Together with Elliott and Angleton he stood on the front lines of the Cold War, holding Communism at bay. But he was secretly betraying them both: He was working for the Russians the entire time.

Every word uttered in confidence to Philby made its way to Moscow, sinking almost every important Anglo-American spy operation for twenty years and costing hundreds of lives. So how was this cunning double-agent finally exposed? In A Spy Among Friends, Ben Macintyre expertly weaves the heart-pounding tale of how Philby almost got away with it all—and what happened when he was finally unmasked.

Based on personal papers and never-before-seen British intelligence files and told with heart-pounding suspense and keen psychological insight, A Spy Among Friends is a fascinating portrait of a Cold War spy and the countrymen who remained willfully blind to his treachery.

ONE OF THE BEST BOOKS OF THE YEAR: The New York Times Book Review, The Washington Post, Entertainment Weekly, Shelf Awareness

Ben Macintyre is a writer-at-large for The Times of London and the bestselling author of Double Cross, Operation Mincemeat, Agent Zigzag, The Napoleon of Crime, and Forgotten Fatherland, among other books. Macintyre has also written and presented BBC documentaries of his work.

“Macintyre has produced more than just a spy story. He has written a narrative about that most complex of topics, friendship. . . . When devouring this thriller, I had to keep reminding myself it was not a novel. . . . [Macintyre] takes a fresh look at the grandest espionage drama of our era.”—Walter Isaacson, The New York Times Book Review

“Macintyre does here what he does best—tell a heck of a good story. A Spy Among Friends is hands down the most entertaining book I’ve reviewed this year.”—Boston Globe

“Macintyre is a superb writer, with an eye for the telling detail as fine as any novelist’s. . . . A Spy Among Friendsis as suspenseful as any novel, too, as the clues tighten around Philby’s guilt.”—Dallas Morning News

“By now, the story of British double agent Harold ‘Kim’ Philby may be the most familiar spy yarn ever, fodder for whole libraries of histories, personal memoirs and novels. But Ben Macintyre manages to retell it in a way that makes Philby’s destructive genius fresh and horridly fascinating.”—David Ignatius, The Washington Post

“A Spy Among Friends is extensively researched, well-written, and a terrific read. . . . An absolutely captivating book.”—Christian Science Monitor

“[Macintyre] deserves full credit for delivering this complex, continent-hopping tale with clarity. . . . The result is, in every sense, a class act. A-.”—Entertainment Weekly

“Excellent . . . I was thoroughly engrossed in this book, beginning to end. It has all the suspense of a good spy novel, and its characters are a complex mix of charm, eccentricity, intelligence and wit. And it offers a great—and mostly troubling—insight into the behind-the-scenes workings of those we entrust with the most important of our political and military secrets.”—HuffPost

“Riveting . . . Mr. Macintyre [is] a shrewd and masterful chronicler.”—Washington Times

“Working with colorful characters and an anything-can-happen attitude, Macintyre builds up a picture of an intelligence community chock-full of intrigue and betrayal, in which Philby was the undisputed king of lies. . . . Entertaining and lively, Macintyre’s account makes the best fictional thrillers seem tame.”—Publishers Weekly (starred review)

This feature require that you enable JavaScript in your browser.
END_OF_DOCUMENT_TOKEN_TO_BE_REPLACED

This feature require that you enable JavaScript in your browser.
END_OF_DOCUMENT_TOKEN_TO_BE_REPLACED

This feature require that you enable JavaScript in your browser.
END_OF_DOCUMENT_TOKEN_TO_BE_REPLACED