From Cochise to Geronimo: The Chiricahua Apaches, 1874-1886 (Civilization of the American Indian #268) (Paperback) 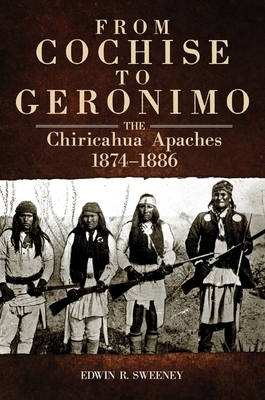 By Edwin R. Sweeney
Email or call for price.
usually available in 3-7 days

In the decade after the death of their revered chief Cochise in 1874, the Chiricahua Apaches struggled to survive as a people and their relations with the U.S. government further deteriorated. In From Cochise to Geronimo, Edwin R. Sweeney builds on his previous biographies of Chiricahua leaders Cochise and Mangas Coloradas to offer a definitive history of the turbulent period between Cochise's death and Geronimo's surrender in 1886.

Sweeney shows that the cataclysmic events of the 1870s and 1880s stemmed in part from seeds of distrust sown by the American military in 1861 and 1863. In 1876 and 1877, the U.S. government proposed moving the Chiricahuas from their ancestral homelands in New Mexico and Arizona to the San Carlos Reservation. Some made the move, but most refused to go or soon fled the reviled new reservation, viewing the government's concentration policy as continued U.S. perfidy. Bands under the leadership of Victorio and Geronimo went south into the Sierra Madre of Mexico, a redoubt from which they conducted bloody raids on American soil.

Sweeney draws on American and Mexican archives, some only recently opened, to offer a balanced account of life on and off the reservation in the 1870s and 1880s. From Cochise to Geronimo details the Chiricahuas' ordeal in maintaining their identity despite forced relocations, disease epidemics, sustained warfare, and confinement. Resigned to accommodation with Americans but intent on preserving their culture, they were determined to survive as a people.

This feature require that you enable JavaScript in your browser.
END_OF_DOCUMENT_TOKEN_TO_BE_REPLACED

This feature require that you enable JavaScript in your browser.
END_OF_DOCUMENT_TOKEN_TO_BE_REPLACED

This feature require that you enable JavaScript in your browser.
END_OF_DOCUMENT_TOKEN_TO_BE_REPLACED