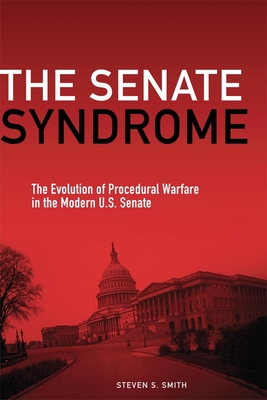 By Steven S. Smith
Email or call for price.
usually available in 3-7 days

With its rock-bottom approval ratings, acrimonious partisan battles, and apparent inability to do its legislative business, the U.S. Senate might easily be deemed unworthy of attention, if not downright irrelevant. This book tells us that would be a mistake. Because the Senate has become the place where the policy-making process most frequently stalls, any effective resolution to our polarized politics demands a clear understanding of how the formerly august legislative body once worked and how it came to the present crisis. Steven S. Smith provides that understanding in The Senate Syndrome.

Like the Senate itself, Smith's account is grounded in history. Countering a cacophony of inexpert opinion and a widespread misunderstanding of political and legislative history, the book fills in a world of missing information--about debates among senators concerning fundamental democratic processes and the workings of institutional rules, procedures, and norms. And Smith does so in a clear and engaging manner. He puts the present problems of the Senate--the "Senate syndrome," as he calls them--into historical context by explaining how particular ideas and procedures were first framed and how they transformed with the times. Along the way he debunks a number of myths about the Senate, many perpetuated by senators themselves, and makes some pointed observations about the media's coverage of Congress.

The Senate Syndrome goes beyond explaining such seeming technicalities as the difference between regular filibusters and post-cloture filibusters, the importance of chair rulings, the changing role of the parliamentarian, and the debate over whether appeals of points of order should be subject to cloture margins, to show why understanding them matters. At stake is resolution of the Senate syndrome, and the critical underlying struggle between majority rule and minority rights in American policy making.

This feature require that you enable JavaScript in your browser.
END_OF_DOCUMENT_TOKEN_TO_BE_REPLACED

This feature require that you enable JavaScript in your browser.
END_OF_DOCUMENT_TOKEN_TO_BE_REPLACED

This feature require that you enable JavaScript in your browser.
END_OF_DOCUMENT_TOKEN_TO_BE_REPLACED