Conflagration: How the Transcendentalists Sparked the American Struggle for Racial, Gender, and Social Justice (Hardcover) 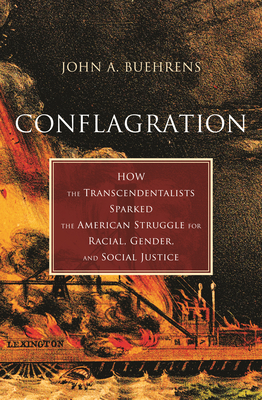 A dramatic retelling of the story of the Transcendentalists, revealing them not as isolated authors but as a community of social activists who shaped progressive American values.

In the tumultuous decades before and immediately after the Civil War, the Transcendentalists changed nineteenth-century America, leading what Theodore Parker called “a Second American Revolution.” They instigated lasting change in American society, not only through their literary achievements but also through their activism: transcendentalists fought for the abolition of slavery, democratically governed churches, equal rights for women, and against the dehumanizing effects of brutal economic competition and growing social inequality.

The Transcendentalists’ passion for social equality stemmed from their belief in spiritual friendship—transcending differences in social situation, gender, class, theology, and race. Together, their fight for justice changed the American sociopolitical landscape. They understood that none of us can ever fulfill our own moral and spiritual potential unless we care about the full spiritual and moral flourishing of others.

John Buehrens was the president of the Unitarian Universalist Association of Congregations from 1993 to 2001. His previous books include Understanding the Bible: An Introduction for Skeptics, Seekers, and Religious Liberals; with Forrest Church, A Chosen Faith: An Introduction to Unitarian Universalism; and with Rebecca Ann Parker, A House for Hope: The Promise of Progressive Religion for the Twenty-first Century.

“A clear, vibrant picture of the varieties of heroism that appear in battles for human rights.”
—Kirkus Reviews

“The book is a historic-biography which also serves as welcome primer on ‘how to become more self-transcendent in these difficult times.’”
—The Boston Globe

“Buehrens skillfully traces the relationships between the Transcendentalists and other leading activists of the nineteenth century, demonstrating how vital these relationships were in shaping not only the individuals involved but entire reform movements. Conflagration provides one of the most extensive portraits of the Transcendentalists to date and helps explain why they continue to fascinate and inspire us.”
—Nicole C. Kirk, Frank and Alice Schulman Professor of Unitarian Universalist History at Meadville Lombard Theological School

“Conflagration is brightly written, deftly organized, and strikingly well-informed narrative history. Where many, perhaps most, accounts of the Transcendentalists center on Concord, and on ideas and personal lives and on writing, Buehrens’s focus is sharply on the larger world of Boston and on ‘fervent activists and their work.’ His grasp of narrative is sure, his stories very readable indeed, and he aims not just for the scholars and specialists but for the general reader. Anyone dismayed by America’s current problems can take heart from this passionate examination of some of our better angels.”
—Robert D. Richardson, author of Emerson: The Mind on Fire

“Transcendentalism was more than Concord! While Thoreau meditated at Walden and Emerson lectured at the lyceum, their spiritual friends fought slavery, created communes, empowered women, and imagined new forms of religious community. The spiritual friendships forged in the early gatherings of the Transcendentalist Club allowed the movement to ripple outward, transforming their own time and our own. Now John Buehrens has told many forgotten Transcendentalist stories in one of the most wide-ranging histories of the movement ever written. Buehrens places Boston’s Church of the Disciples and its pastor, James Freeman Clarke, at the center of his multifaceted story. These ‘Disciples,’ among them women’s rights champion Julia Ward Howe and the Republican politician John Andrew, built bridges between Christian liturgy and post-Christian mysticism, between armed resistance to slavery and the political establishment, and between Boston and the nation. Their legacy challenges us to transform both our understanding of Transcendentalism and our own lives.”
—Dan McKanan, author of Prophetic Encounters: Religion and the American Radical Tradition

“Conflagration is a fresh and stimulating history of Transcendentalism, the radical religious and political movement that has remained enigmatic over the decades despite volumes of scholarly analysis. Rather than asking what Transcendentalism means, John Buehrens asks instead what did the Transcendentalists do? They led a dramatic shift of the course of American history, he answers, toward an ethos of world-inclusive spirituality and egalitarian social reform. His biographical perspective and his eye for the shared sympathies circulating among Transcendentalist adherents enlarge and enliven our understanding of the movement’s legacy. Conflagration is the book that makes it clear that Transcendentalism was indeed a movement. Its dedication to justice, comprehensive knowledge, and universal compassion are values that now seem of critical importance.”
—David M. Robinson, author of Natural Life: Thoreau’s Worldly Transcendentalism

This feature require that you enable JavaScript in your browser.
END_OF_DOCUMENT_TOKEN_TO_BE_REPLACED

This feature require that you enable JavaScript in your browser.
END_OF_DOCUMENT_TOKEN_TO_BE_REPLACED

This feature require that you enable JavaScript in your browser.
END_OF_DOCUMENT_TOKEN_TO_BE_REPLACED