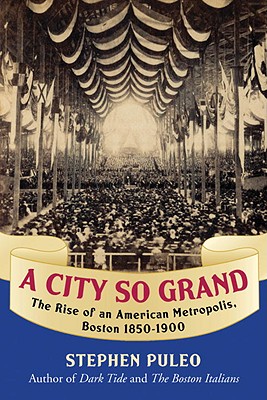 Once upon a time, "Boston Town" was an insulated New England township. But the community was destined for greatness. Between 1850 and 1900, Boston underwent a stunning metamorphosis to emerge as one of the world's great metropolises-one that achieved national and international prominence in politics, medicine, education, science, social activism, literature, commerce, and transportation.

Long before the frustrations of our modern era, in which the notion of accomplishing great things often appears overwhelming or even impossible, Boston distinguished itself in the last half of the nineteenth century by proving it could tackle and overcome the most arduous of challenges and obstacles with repeated-and often resounding-success, becoming a city of vision and daring.

In A City So Grand, Stephen Puleo chronicles this remarkable period in Boston's history, in his trademark page-turning style. Our journey begins with the ferocity of the abolitionist movement of the 1850s and ends with the glorious opening of America's first subway station, in 1897. In between we witness the thirty-five-year engineering and city-planning feat of the Back Bay project, Boston's explosion in size through immigration and annexation, the devastating Great Fire of 1872 and subsequent rebuilding of downtown, and Alexander Graham Bell's first telephone utterance in 1876 from his lab at Exeter Place.

These lively stories and many more paint an extraordinary portrait of a half century of progress, leadership, and influence that turned a New England town into a world-class city, giving us the Boston we know today.

Stephen Puleo is author of the "Boston Globe" best seller "The Boston Italians" and the critically acclaimed"Dark Tide: The Great Boston Molasses Flood of 1919." A former award-winning newspaper reporter and contributor to "American History" magazine, he holds a master's degree in history and wrote his thesis on Italian immigration and the settlement of Boston's North End. He donates a portion of his book proceeds to the Juvenile Diabetes Research Foundation (JDRF), the leading charitable funder and advocate of juvenile (Type 1) diabetes research. He and his wife, Kate, live in Weymouth, Massachusetts.

It's been quite a while since I've read anything—fiction or nonfiction—so enthralling.—Dennis Lehane

This feature require that you enable JavaScript in your browser.
END_OF_DOCUMENT_TOKEN_TO_BE_REPLACED

This feature require that you enable JavaScript in your browser.
END_OF_DOCUMENT_TOKEN_TO_BE_REPLACED

This feature require that you enable JavaScript in your browser.
END_OF_DOCUMENT_TOKEN_TO_BE_REPLACED